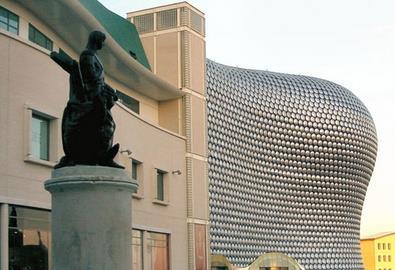 The charter sets out much of the proposed scope and detail on which the Birmingham City Centre Big Plan – formerly known as the masterplan – will be based.

As part of the plethora of ideas, it proposes the city core be extended to the south and west, to take in northern Digbeth, the Wholesale Markets, Southside and Attwood Green. These areas would be designated as part of an extended ‘city centre core’, subject to high-density mixed-use development comparable with that in the city centre, within the inner ring road, and Brindleyplace.

The next concentric ring outside the core should be designated as the ‘city centre buffer zone’ and act as a link between the centre and surrounding neighbourhoods.

Birmingham City Council selected Urban Initiatives last August to draw up a masterplan for the city centre of almost 2,000 acres. The Big City Plan Charter is a ‘statement of intent’ to form the basis of consultation.

Over the next 18 months, Urban Initiatives will produce an area action plan – the Big City Plan – which will detail options for the city core, buffer zone and surrounding neighbourhoods.

But the proposals could be bad news for Edgbaston’s hopes of becoming the final destination of the proposed route of the Metro.

The Metro extension runs from Snow Hill station through the city centre along Broad Street, past Brindleyplace and ending in Hagley Road in Edgbaston.

The charter also calls for a media quarter in Eastside to rival Dublin’s Digital Media Hub and Manchester’s Knowledge Hub.