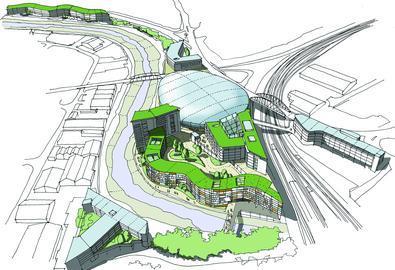 A £250m, arena-led regeneration scheme in Bristol has been abandoned because it would need too much public money to succeed.

The South West of England Regional Development Agency and Bristol City Council said the £86m they would need to spend on the scheme to make it viable would not represent good value for money.

The scheme was being developed in conjunction with private consortium Bristol Waterside Arena.

It would have been a mixed-use scheme with a 10,000-seater arena at the centre, built on a former diesel depot next to Bristol Temple Meads station.

Not at any price

SWERDA said that £86m would have had to be spent on land, site clean-up and other essential services. It added that indoor arenas cannot be built without public sector investment because the value of the completed buildings is significantly lower than the construction costs.

Ian Knight, SWERDA area director, said: ‘We are very disappointed that it has not proved feasible to build an arena for Bristol, but the latest figures show that it would simply not be a good use of public money. We were always supportive of including an arena in this development – but not at any price.’

The project was to be part of the wider £750m Temple Quarter redevelopment. A mixed housing and commercial development will still go ahead on the site.