London councils should evaluate their green belt polices and allow houses to be built on areas of the land in order to help solve the capital’s housing crisis, according to a new report. 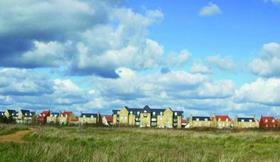 The report by business group London First, Quod planning consultancy, andthe Spatial Economics Research Centre at the London School of Economics, says that while London councils should adopt a brownfield first policy, build at greater densities, and make better use of surplus public land, this will not be enough to tackle the capital’s housing crisis.

The report also reveals new figures that show three quarters of green belt land in Greater London is already used for agriculture or other purposes.

The report says it is unrealistic to assume that simply building on brownfield sites - which can be complex and costly - will provide sufficient land to meet London’s housing need and that a re-evaluation of the green belt is also required to help solve London’s housing crisis.

It says a review of the green belt should focus on areas that are close to existing or future transport nodes; are of poor environmental or civic value; and could better serve London’s needs by supporting sustainable, high-quality, well-designed residential development that incorporates truly accessible green space.

The study also shows that only a quarter of the land inside Greater London’s area is environmentally designated land, parks, or land with real public access and that 76% of London’s green belt is used for agriculture and other purposes such as golf courses, utilities, historic hospitals.

Paul Cheshire, professor of economic geography at the London School of Economics, and co-author of the report, said: “The truth is that green belt land covers a range of uses. There is beautiful countryside with public access but there is also a lot of intensive arable and semi-derelict land. Golf courses - just in the GLA - cover an area almost twice as big as the Borough of Kensington and Chelsea.

Barney Stringer, director Quod, which carried out the analysis of the green belt, said: “This analysis shows that the green belt in London is a real mixture - from the beautiful and precious, to the frankly underused and inaccessible.

“We need to make the most of brownfield sites, but if we want to protect the quality of London for the growing number of people who live in London, then we can’t continue to rule out sensible reviews of the green belt boundaries.”

Baroness Jo Valentine, chief executive of London First, said: “If London is going to solve its housing crisis we need action on multiple fronts, including building at greater density, developing brownfield land, and - yes - better use of the greenbelt.

“Building homes on brownfield land first is always the best option, but these sites are often very complicated, costly, and slow to bring forward.

“While London must continue to protect its valuable green spaces, the reality is the greenbelt is misunderstood.

“Parts of it are unloved and of no environmental or civic value, yet can be easily reached by public transport. These are the parts of the green belt that councils should be proactively looking at to accommodate more homes.”