Call Off Duty: petition for reforms to stamp duty tax

The readers of Property Week have officially called on chancellor Philip Hammond to announce reforms to the punitive stamp duty regime in his Budget speech on 8 March.

This Tuesday, associate editor Adam Branson and digital news editor Samuel Horti delivered a petition signed by more than 100 companies to the Treasury. The petition and accompanying letter were whisked straight to Hammond’s private office.

In the letter, Property Week editor Liz Hamson laid out a list of five demands to the chancellor, based on reader feedback  to our Call Off Duty campaign, launched in December.

The reforms together constitute the single biggest way of boosting the delivering of homes in the UK. 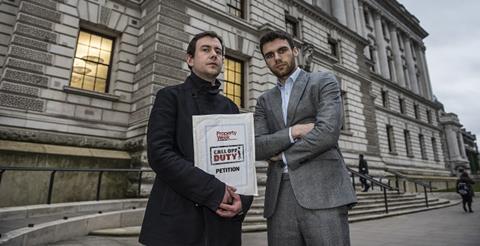 Property Week launched Call Off Duty after Hammond failed to announce any changes to stamp duty land tax (SDLT) in the Autumn Statement, despite coming under pressure from the industry to do so.

Over the past three months, we have made the case that the current regime, introduced by Hammond’s predecessor George Osborne, discourages first-time buyers, puts institutional investors off the nascent build-to-rent sector and cripples transaction volumes and development in the South East.

Encouragingly, communities secretary Sajid Javid is reported to have shown support for changes to the tax and, in particular, for older people to be exempt if they are downsizing, on the grounds that this would help them move and free up thousands of family homes for younger buyers.

Disappointingly, no reforms were forthcoming in the government’s housing white paper, released earlier this month. However, there are still two opportunities for Hammond to make the much-needed changes: the Budget next month and the new November Budget, which is replacing the Autumn Statement.

Property Week hopes the industry’s calls do not fall on deaf ears and eagerly awaits the Treasury’s response.

“In the government’s own words, ‘the housing market is broken’,” wrote Hamson. “Reforming SDLT will go a long way towards fixing it.”

We may have delivered the petition to No.11 Downing Street but we still need your support.

If you want the chancellor to heed your calls for change to the stamp duty regime, make sure you add your name to the campaign here: 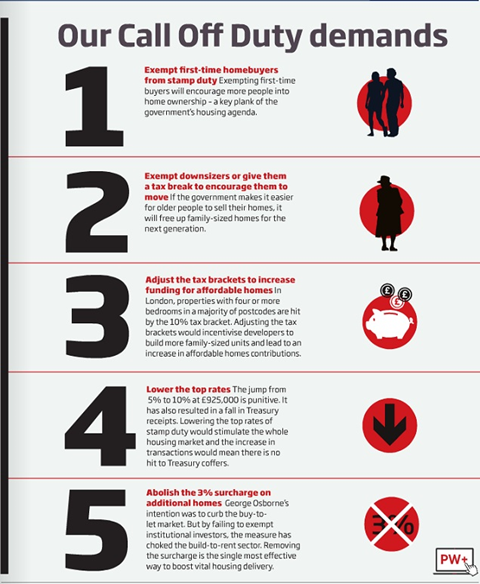