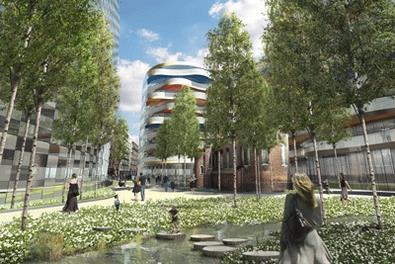 Christian Candy’s CPC Group has carried out a swap with Icelandic bank Kaupthing that enables the company to exit London’s Noho Square development.

Kaupthing has agreed to transfer its equity and shares in the 9900 Wilshire project in Beverly Hills to CPC, which will now inherit the equity and hold 90% of the shares in the project. Entrepreneur Richard Caring will hold the remaining 10%.

In exchange CPC has transferred its equity and shares in London’s Noho Square to Kaupthing, which was nationalised by the Icelandic government this month after its UK arm, Kaupthing Singer & Friedlander, went into administration. Kaupthing will own 100% of the project.

The Noho Square deal is complete. The Beverly Hills swap is subject to the consent of the 9900 Wilshire Lending Group, which is led by Credit Suisse and owed around $350m (£200m). The loan financed the $500m (£285m) Beverly Hills land purchase last year.

This site in Fitzrovia, which was bought for £175m in 2006, was bought with £21m of equity from Kaupthing and £14m of equity from CPC. The site, however, is now worth far less than its purchase price and the last informal valuation put the site value at around £120m. There is also a £200m senior debt loan on the site. The CPC group has no liability on the senior loan.

Kaupthing has begun looking for a joint venture partner from a shortlist that includes CPC, which has detailed knowledge of the site and its development potential. CPC may consider an outright purchase of the site.

A CPC spokesman said: ‘We have worked closely with Kaupthing to reach an agreement that is mutually beneficial to both businesses. 9900 Wilshire is the best 8 acres on the west coast of America and we remain committed to creating a world-class development within Beverly Hills as our first foray into the US.’

Mike Samuels, head of real estate advisory at Kaupthing, said: ‘This agreement shows the strong relationship we enjoy with CPC. Going forward we shall be selecting a JV partner form a shortlist which includes CPC. We still have every confidence in the site, and believe it is capable of supporting a world class development.’

CPC Group has stressed that speculation in London’s Evening Standard this week that it is in dispute with the billionaire Mittal family over disruption caused by its Chelsea Barracks site is untrue.

A spokesperson for Project Blue (Guernsey) said: ‘We appreciate the significance of the demolition taking place. We have placed four vibration monitors, with the owners’ agreement, within four neighbours’ properties to the north of the site, including Mr Mittal's. The monitors are placed there to measure any vibration which may arise in these properties as a result of the demolition and to confirm that we are working to acceptable levels.

All of the measurements to date confirm that we are working to acceptable levels. This data is issued weekly to the Environmental Health Team at Westminster City Council who also monitor our work and is available to the property owners, should they wish to see it.’