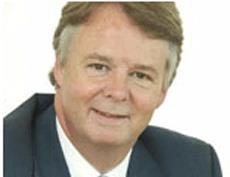 Evans, who is also chairman of the firm's City business team, is leaving to pursue other interests. He has worked for 35 years in the property industry, starting as a surveyor at Chesterton before moving to St Quintin in 1977, where he became an equity partner in 1985 and chairman in 1997.

In a note issued to staff this morning CBRE’s EMEA chief Mike Strong said: ‘Robert has made an enormous contribution to the achievements of CB Richard Ellis.

He has worked with and provided strategic advice to many of our key clients over the years including the Bank of England, Beacon Capital, Canary Wharf Group, Hammerson, Land Securities, the LDA, Sellar Property Group and UBS.

‘Robert feels that now is the right time to change his work-life balance, pursue other interests and ‘recharge the batteries’.'

Over the remaining months he will be working as normal to ensure a smooth transition on the projects with which he is presently involved. After that he will remain a consultant to the firm.

Evans is also on the board of Think London/London First, the Estates Board of the Royal College of Art and a non-executive director of Corney & Barrow.