Centros’s £150m Lancaster scheme to be called in 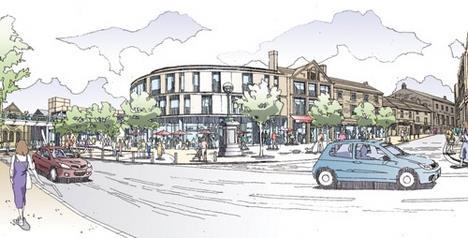 Centros’s plans for a retail-led scheme in Lancaster were called in by the secretary of state last night.

Lancaster City Council’s planning committee approved the outline planning application for the Castle View development and referred the application to the Government Office for the North West.

English Heritage wrote to the Government Office for the North West to recommend that the outline planning application for the scheme be called and last night it was called in.

Henry Owen-John, north west planning and development director for English Heritage, said: ‘Implementing this scheme would cause lasting harm to Lancaster and damage much of what makes the city such a distinctive and special place. In the light of this danger to one of England’s major historic cities, we welcome the decision by the Secretary of State to call it in.

'A public inquiry is the proper forum to debate what are issues of national significance.’

David Lewis, associate director of Centros, said: 'We are extremely disappointed about GONW’s decision. The high cost of a public inquiry and the delay it will cause puts at risk the whole regeneration of Lancaster’s city centre and will undoubtedly put off other developers from investing in the city. More than anything else, I am disappointed for the residents of the city and its surrounding communities - who we know through an authoritative opinion poll by ICM support our development plans by a majority of four to one.

'It is unfortunate that the extensive lobbying that was undertaken by English Heritage after the decision of the city council has led the Secretary of State to conclude there is a need to re-examine the well-rehearsed issues which have already been discussed at length through the planning process. The delivery of over 1,000 new jobs, more than 150 new homes, new public amenities including a park, new premises for the city’s unique Musicians’ Co-operative, restoration and enhancement of all the listed buildings including the two theatres, as well as major improvements to the canal side and the city’s inner ring road is, therefore, now at risk.

'Such a decision in the current economic climate is difficult to comprehend. What it says is that both English Heritage and the Government feel that retaining a few poor-quality, un-listed and unloved buildings in a conservation area is more beneficial to Lancaster than all of the benefits I have just mentioned.

'It also goes against the grain of the Government’s whole agenda for town and city centre regeneration – which itself was born out of the desire to halt the exodus of retailers from town centres to out-of-town locations.