Chelsfield Partners frontrunner for US embassy 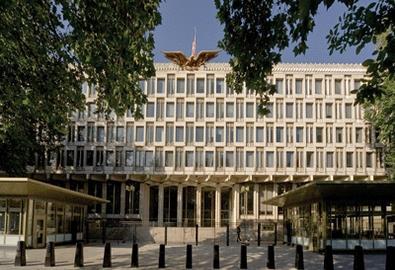 Elliott Bernerd and Sir Stuart Lipton's Chelsfield Partners has emerged as frontrunner to buy the US embassy headquarters in Mayfair, London.

The company, which is backed by the Qatar Investment Authority, is thought to be in advanced negotiations with the Embassy regarding the purchase of the 999-year long leasehold.

The US embassy brought the leasehold interest to the market in December after agreeing a deal with Ballymore to relocate its operations in Mayfair to a site in Battersea, south London.

Bids were received from a wide range of parties including Grosvenor, which is also the freeholder of the property, Sellar Property, Hines and Prince Alwaleed of Saudi Arabia’s Kingdom Holdings.

It is thought the final shortlist included Chelsfield Partners and Kingdom Holdings.

Prices have not been revealed but it is thought to be more than £300m. There is considerable risk attached to the deal as the Department for Culture, Media and Sport may still decide to list the building which is the only Eero Saarinen-designed building in the UK.

The embassy is also unlikely to move to its new home on Ballymore’s land in the Nine Elms Opportunity Area of Battersea until 2016. The move is also subject to approval by the US Congress.