City Hall is working up plans to scrap viability assessments for developments that meet a fixed affordable housing percentage of around 35%, London’s deputy mayor for housing has confirmed. 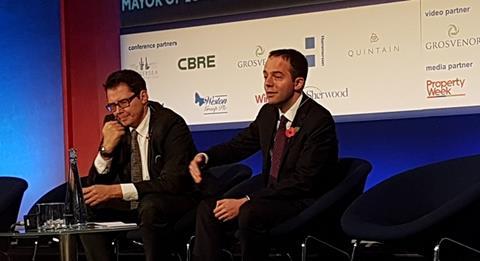 The fixed rate would be voluntary, but the scheme will give developers who surpass the threshold “greater certainty” over planning permission, James Murray said at the London Property Summit this afternoon.

“If we can offer people certainty by saying: ‘If you meet a fixed amount you can go through without all the hassle of viability’, that could offer a really good option,” he said.

.@jamesmurray_ldn goes a long-way to suggest 35% will be preferred affordable housing level using it as a frame in Q+A #londonpropertysummit

He added that the fixed rate would be 35% “or very near that”.

Details of the policy will be laid out in planning guidance coming out “before Christmas”, and the industry will have a chance to provide feedback before it is implemented.

Murray said he had already spoken to developers about the plan and there had been a “great deal of interest”.

Mount Anvil chief executive Killian Hurley said the plan was a “good idea” and would reduce land values in London.

“It should come off the land value, you factor it into your land value and you get a speedier application. I think it gives you more clarity.”

But Crest Nicholson chief executive Stephen Stone warned that developers that do not meet the 35% level would face unnecessary delay.