The City of London Corporation’s Planning and Transportation Committee has approved plans for a mixed-use development in London’s Holborn, which will be the greenest building in the capital. 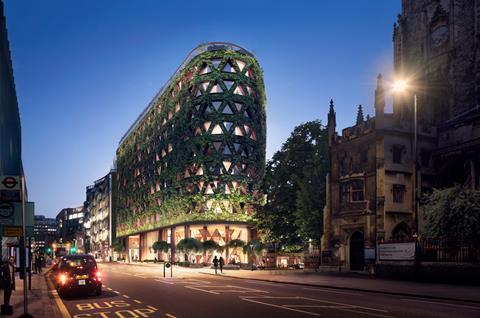 The proposal for the 11-storey development, submitted by Dominvs Group, will be built at 61-65 Holborn Viaduct and will have a 39,826 sq ft “green wall” at the building’s façade.

The wall will be made up of a mix of plants and generate seven tonnes of oxygen in a year and extract nine tonnes of CO2 annually.

The 382-bed hotel will be built alongside a 40,267 sq ft of office space and a landscaped public roof garden.

“This development’s green wall of around 400,000 plants offers many environmental benefits such as reducing pollution, absorbing sound and reducing flood risk,” said Alastair Moss, chair of the City of London Corporation’s Planning and Transportation Committee.

Preet Ahluwalia, director at Dominvs Group, added: “The green wall, which has been produced by Sheppard Robson architects and Phil Allen Design, will play a significant role in absorbing carbon dioxide and Dominvs is delighted be improving air quality and sustainability in the City of London.”