Colliers International has bolstered its City offices team with the appointment of Tim Cooney as an associate director. 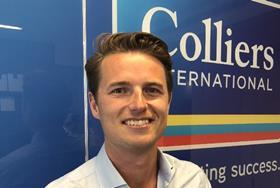 Joining the team which launched last October, Cooney will work within its occupier acquisitions and advisory division. He has joined after three years at Farebrother & Union Street Partners where he provided strategic advice to niche and corporate occupier clients in central London, Midtown and the South Bank.

Originally from Melbourne, Cooney began his career in property at Hodges Real Estate and later moved to Axis Property in 2012 before relocating to the UK in 2015.

Stuart Commins, director of City occupier acquisitions & advisory at Colliers, said: ”Tim’s appointment not only boosts our bench strength at an incredibly busy time, but his energy and hunger to succeed, paired with his reputation for providing top quality advice, helps to reinforce our team identity as we increase our presence in the City.”