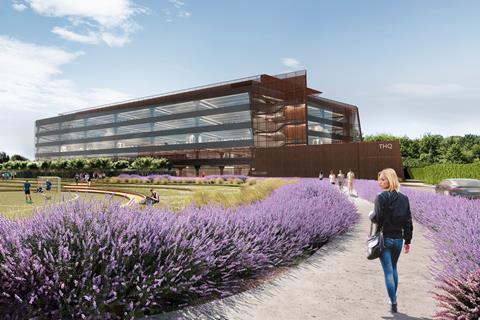 Development of the first phase of the online beauty retailer’s “THQ” is set to begin later this year, after plans for the mammoth scheme were revealed in late 2018.

This will bring forward 288,000 sq ft of new office space at Airport City Manchester with the building scheduled to open in 2022.

Two further phases will follow the first with the completed scheme expected to support up to 10,000 jobs.

THG was represented by Gowlings and architect PENSON.

THG currently employs around 2,000 people at Airport City Manchester, occupying space in the Voyager and 4M office buildings next to the site. Planning for a temporary surface car park for THG staff has been submitted to support them during the construction of the new HQ.

Haigh said the deal was “a defining moment for Airport City Manchester”.

“We believe this will be one of the UK’s largest bespoke office developments outside of Greater London as well as one of the largest ever by a company based in the North West,” he continued.

“It’s an innovative transaction in which we will deliver state-of-the-art business accommodation, and in safeguarding adjoining land parcels for subsequent phases of planned future growth, we reflect and foster a long-term partner-style relationship with THG to grow sustainably together.”

THG chief executive Matthew Moulding added: “THQ is a landmark development for THG and another important step in our growth story. As we continue to extend our global footprint, it makes sense for us to base our headquarters at Airport City Manchester, with its global connections and access to talent and supply chains worldwide.

“THQ and ICON cement our position as a significant player and employer in the UK and we look forward to expanding even further from here, attracting and retaining the most innovative and inventive talent from across the globe.”

Manchester City Council leader Sir Richard Leese said: “This is an exciting time, not only for Airport City Manchester and The Hut Group, but the North West. Airport City Manchester will fill the gap in the market for high quality and well-connected environment for businesses and with its first office occupier being a well-established, global business such as The Hut Group, this demonstrates the development’s innovative and complementary offer to Greater Manchester’s existing assets and existing dynamic economy.”