The council leader at the centre of a bitter row with Earls Court developer Capital & Counties (Capco) is prepared to release documents he believes will prove the property group agreed to hand back two social housing estates at the heart of the controversial development, Property Week can reveal. 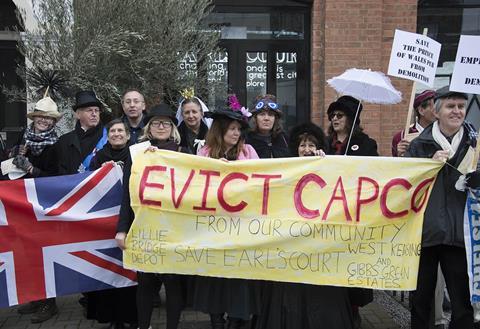 Earls Court protestors have been a thorn in Capco’s side for almost a decade.

The threat from Labour councillor Stephen Cowan, leader of the London Borough of Hammersmith & Fulham (LBHF), follows a denial from Capco that any such agreement exists.

As revealed by this publication earlier this week, Cowan wrote to residents of the West Kensington and Gibbs Green Estates telling them he had asked Capco to honour the agreement he claims was made on 2 March during a meeting attended by him and Capco’s chief executive Ian Hawksworth.

Following Capco’s denial of his claims, Cowan is now prepared to publish the minutes of the 2 March meeting, as well as letters between the two companies, which the council claims will prove Hawksworth agreed the deal.

A spokesman for Cowan told Property Week: “If Capco is happy to release the letters exchanged between us and them following the meeting on 2 March, the council is happy to make them public.

“Those letters will show that, as the letter from the council’s leader states, Hawksworth did indeed agree it would be in the best interests of the council and Capco to return the estates to council ownership in exchange for return of the monies paid to the council.

“The council’s leader and Ian Hawksworth shook hands on this.”

The spokesman added Hawksworth has since “backtracked from this position, changing on more than one occasion the terms on which they would return the estates.”

The council would not comment further on what the letters contained about discussions between the parties on the 77-acre Earls Court scheme, but a source at the council added they would prove that not only did Hawksworth agree to hand back the two estates, the Gibbs Green School and Farm Lane to the council during the 2 March meeting, but that there were several other meetings between representatives of the two parties to progress the handover.

The source said that Hawksworth had initially said the handover would take up to nine months, but that Cowan was able to persuade him that it could be far quicker, and the council could draw up the paperwork in a matter of weeks.

Capco, which is currently considering a demerger to split its two core holdings at Covent Garden and Earls Court into two separately listed businesses, would not add to a statement it made yesterday in reaction to Cowan’s letter. However, a source close to the property group, which also owns swathes of Covent Garden in London, said it had made it clear for some time it was prepared to negotiate with the council over the future of the estate.

In his letter to residents, dated 27 July, Cowan wrote: “On 2 March 2018 Capco’s chief executive told the council that the Capco board had agreed that it is in the best interest of both Capco and the council to return the West Kensington and Gibbs Green Estates, Gibbs Green School and Farm Lane to the council. I have written to the Capco board urging them to stick to this statement and do so quickly.”

“Capco has threatened 2,000 of my constituents with demolition of their homes for 10 years,” added Slaughter. “Now it renews that threat even though its cannot afford to build its own scheme, its value is collapsing and no one will buy them out.”

Cowan took the helm of the council in June 2014 after the previous Conservative administration had approved Capco’s plans for the site and the demolition of the two housing estates in September 2012.

Last week, Capco revealed total writedowns at the Earls Court scheme were now around £450m. Since 2016 the project’s value has plummeted from £1.4bn to £707m. The latest devaluation takes into account Capco’s £250m sale of the Empress State Building, which sits on the site.