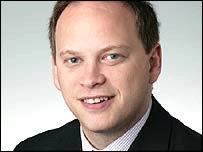 Shadow housing minister Grant Shapps said today that development has to stop being a 'dirty word' if Britain’s housing crisis is to be solved.

Shapps told a fringe meeting at the Conservative Party Conference, organised by housing group Shelter, that local councillors, should not be afraid of taking a pro-development stance.

He said the local electorate had to be convinced that building more houses meant better local facilities and help to regenerate deprived town centres.

‘There has to be a new settlement,’ said Shapps. ‘The reason why local communities are against development is because there is nothing in it for them.

'The benefits are all for the people moving in to the new houses. I think we need to reverse that situation.’

Shapps said that local councillors felt unable to support new development in their areas because they felt it was a guaranteed vote loser.

He wants local authorities to make greater efforts to sell the positives of development and even stand for election on a pro-development ticket.

‘Development should no longer be a dirty word,’ said Shapps.

He said that in his constituency of Hatfield there has been opposition to development of further housing.

However, he said that local authorities had to make cogent arguments to win over local opposition.

‘Once you explain that there will be benefits to development and you won’t have to close the local hospital or the local post office because there will be a thriving community which needs those services you will find local people will come around,' he said.

Adam Sampson, chief executive of Shelter, said the Conservatives were already in a position to bring forward housing that has so far fallen short.

He pointed to their strengths in local government which he said had to be better utilised.

‘The Conservatives are already the party of housing in local government so there is no reason why these ideas should not be put into practice now,’ he said.

‘The key question which a Conservative government will have to address is where are the funding streams for these new developments going to come from.

'There has to be some form of counter-cyclical public sector spending to ensure that house builders are still active during the downturn so we don’t lose momentum until things get better,’ he said.