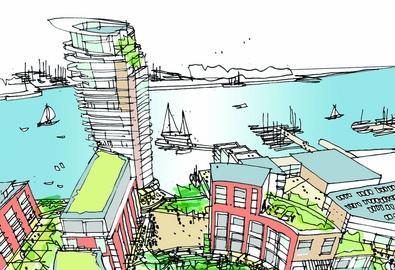 Crest Nicholson has submitted a planning application to Southampton City Council for the redevelopment of the former Vosper Thornycroft site in Woolston, Southampton.

Crest Nicholson’s regeneration arm, in partnership with the South East England Development Agency (SEEDA), plan a scheme called Centenary Quay at the 31 acre former shipbuilding site which is situated on the east bank of the River Itchen, south of the Itchen Bridge.

Centenary Quay will comprise 1,653 homes for the area, 413 of which will be affordable, a food store, a 3-star 100-bedroom hotel, and a new public plaza with shops, cafes and restaurants overlooking the River Itchen.

This application follows the previous application submitted by SEEDA, which has been granted planning permission following the signing of a section 106 agreement.

The joint venture said the scheme will bring an estimated £500m investment into Woolston and create around 1,000 jobs.

Deborah Aplin, managing director at Crest Nicholson Regeneration, said: ‘Southampton’s new waterfront will create a rich mix of places for the whole community to enjoy with a new civic square, public gardens and a riverside walk.

'We’re working closely with the council to provide a scheme that meets the needs of the local community and will continue to liaise with them on a regular basis now the applicationhas been submitted.’