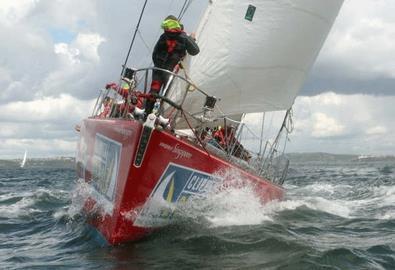 In preparation for training I started reading a book about a number of people trying to sail single handily, without stopping around the world.

This ‘race’, the Golden Globe happened in 1969.  My journey to Gosport was almost entirely taken up with this book.

I was really getting involved in the story of a number of the most prominent sailors and adventurers of the age including one Knox-Johnson by the time the train rolled in at Portsmouth  Harbour leading me to my own nautical adventure; the ferry from Portsmouth to Gosport (which lasts about 5 minutes!) I was told to go to Ariel, a 60 foot clipper where I would be assigned a berth.

I was allocated to ‘Blackadder’ a similar 60 foot clipper and my immediate thoughts were of Baldrick and Lord Percy’s expedition to the Caribbean with the ‘legless captain’. The rest of the crew arrived within the hour – eight trainees the skipper and 1st mate.  The initial briefing filled us in a little on what was planned for the week as well as giving us more information on Clipper Ventures.  It also spoilt my book for me as they told me that the founder of Clipper Sir Robin Knox-Johnson was the first to sail single-handedly around the world, so much for surprises.

The plan outlined was 3 day sails then a 4 day 3 night sail to get a feeling for what the race was about. Amongst my fellow trainees were 3 other complete novices, 1 day skipper, 1 quite experienced sailor and 1 chap who had been involved in the 1979 Fastnet race. In 1979 a number of conditions led to the Fastnet race being the most tragic sailing race disaster, with 15 people dead.

Our ‘trainee’ was the last man pulled out of the water alive, and was there to train so he could finally complete the race (in 2009) and get ‘closure’. We had our first meal aboard (curry from tins) – good training for the race we were told, and then off to the pub to bond!

Our first night on board the boat meant finding a berth for each of us.  Emma and I shared the honeymoon suite, so named because of the relative isolation that came from being in the bow of the boat. The two remaining bunks at the front of the boat were empty, as there were twenty bunks on board.

One thing we had not anticipated was the cold, it was freezing. Almost all on board ‘layered up’.  It was my first time to sleep in jeans, socks, two rugby tops, but needs must…