Developer interest in former Horlicks site starts to hot up

A handful of residential developers have tabled bids for GlaxoSmithKline’s Horlicks factory site in Slough. 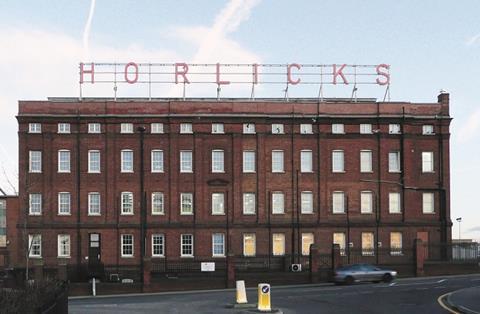 The Horlicks factor dates back to 1908

The redevelopment opportunity is understood to have received five bids from a mix of private rented sector (PRS) developers and housebuilders.

The 6.5-acre former manufacturing site was closed down in July last year and owner GSK has submitted plans for the site to be converted into a large scheme of up to 766 homes.

CBRE was instructed to sell the town centre site earlier this year and it is expected to fetch around £40m.

“Last year, we announced that we will close manufacturing at our Slough site. We will share our future plans for the site sale when finalised,” a GSK spokesman said.

Calls from Slough residents for the building to be listed have been rejected by Historic England. GSK’s pre-planning proposals, however, promised to preserve the “external form” of the property.

Slough Borough Council has declared that BTR is “acceptable for part of the development”, with the local authority adding that it expected “private for-sale housing as well as affordable and private rental” on the site.

The Horlicks factory was built in 1908 to produce the eponymous malted drink. GSK is in the process of selling the Horlicks brand for £3bn.

Another Slough manufacturing site with plans for a residential conversion has also come to market. Dutch-based paint and coatings firm AkzoNobel is selling the former ICI site on Wexham Road.

AkzoNobel, which has instructed Deloitte to sell the property, stopped manufacturing in 2016 and is moving to a location in Ashington, Northumberland. Its R&D facility is still based on site and will be sold on a sale-and-leaseback basis to the new owner.

A pre-planning application submitted to the council proposed redevelopment of the site and subsequent conversion into residential. The scheme could involve the construction of 500 to 700 homes.