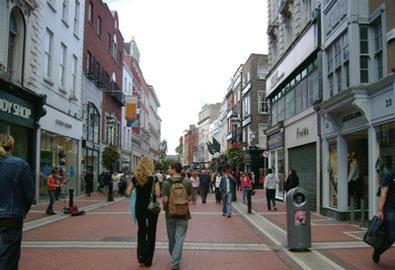 It said that with rents of €4,951/sq m a year it comes behind the most expensive, Les Champs Elysee in Paris, Stoleshnikov Lane in Moscow and New Bond Street in London.

Stephen Murray, retail director at JLL in Dublin said: 'Grafton Street has remained in fourth position among European cities and retains that position by a comfortable margin with an overall rent per square metre that is 37% higher than its nearest rival, Munich, which is in fifth place.

'Notwithstanding the current slowdown in the economy, it is noteworthy that active demand has produced a number of newly announced occupiers for larger-sized units. These include three American or Canadian brands, Tommy Hilfigger, American Apparel and Aldo Shoes, which have not yet completed their fit-outs or commenced trade.'

James Dolphin, head of European retail agency at JLL said: “'The prime high streets of Europe have performed relatively well over the last year and in some cases have prospered, despite turbulence in the financial markets and pressure on consumer spending.

'In general prime rental levels are expected to remain stable across the region as the weaker consumer spending growth in most of Europe is counter balanced by the continuing strength of occupier demand for the best locations.'

In Moscow strong demand from an increasingly wealthy population, a shortage of available space and a low level of transparency mean that rental growth is expected to continue.

The primary cities of Greece and Turkey saw some of the highest rental increases with Tsimiski Street in Thessaloniki, Ermou Street in Athens and Bagdat & Istiklal Streets in Istanbul all recording an annual growth of over 25% although mitigated in Turkey by inflation at 10%.

This is due largely to a limited supply but strong demand for units, particularly from international brands.

Neville Moss, head of European Retail research at JLL said: 'Several prominent locations in mature markets, particularly Germany and The Netherlands, are also anticipated to see solid rental growth through the year despite a projected slowdown in the economy, again largely thanks to major International brands seeking representation and a scarce supply of prime space.

'Meanwhile, the outlook is less favourable for areas such as the Baltic States, where retail is concentrated within shopping centres and their economies face particular imbalance. A handful of western European locations, are also expected to see some downward pressure on rents, most notably in Spain.'