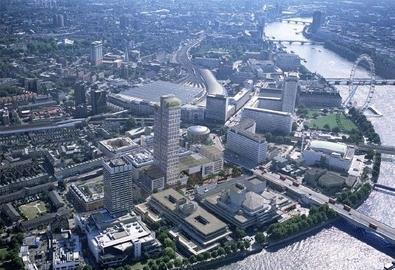 The plans were approved by Lambeth Council and the Mayor in August but it was called in last September following a public inquiry.

Coin Street is hoping to develop private apartments in the 43-storey tower – and would use income from the flats to subsidise public facilities including a new swimming pool.

Simon Thurley, chief executive at English Heritage, said: ‘English Heritage believes that the advice of the Planning Inspector to the Secretary of State for Communities and Local Government, Hazel Blears, was clear. This scheme would cause serious harm to London’s historic environment. The Secretary of State took the view that this harm was outweighed by the proposed community benefits.

‘In reaching that view the Secretary of State did not consider if the community benefits could be delivered in a less harmful scheme. The applicants have never sought to justify the need for the height of the tower on community benefit grounds alone.

‘The Secretary of State is of course entitled to disagree with her Inspector’s advice, but she must take into account all relevant factors, and it is highly relevant that the harm to London’s historic environment could be avoided.'

They asked the Secretary of State to ‘respond positively to this challenge and to look again at the ways in which this scheme can be delivered which avoids harm to one of London’s greatest assets – its heritage’.

In response, Iain Tuckett, group director of Coin Street Community Builders said: 'The news that English Heritage and Westminster Council are challenging the Secretary of State’s decision to grant consent for our Doon Street development will not affect our decision to proceed with its detailed design.

'Their challenge seems more related to their untenable position at the Inquiry into two developments on Blackfriars Road than any hope of winning an appeal at Doon Street.

'The Secretary of State’s decision letter clearly demonstrates that she took full account of both heritage impacts and benefits to the wider community. She decided that on balance the proposals should be supported.

'That was also the view of Lambeth Council, the Greater London Authority and the locally-elected Member of Parliament. English Heritage is very liberal with spending taxpayers’ money on legal fees: it should spend the resources we give it on restoring historic buildings rather than challenging elected authorities.'