Consultancy firm Paragon has launched what it claims is the sector’s first in-house drone surveying service following the appointment of a former Formula One aerial specialist. 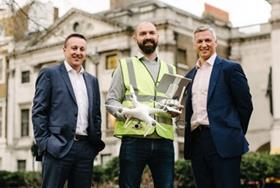 Elliott Garrett has joined the firm after nine years working for Formula One Management and will head up a team that will employ drone technology to produce condition reports on commercial and retail buildings.

In his previous role, he used the technology to plan Grands Prix infrastructure at racetracks across the globe and conducted precision GPS surveys of racing circuits using Global Navigation Satellite Systems (GNSS), laser scanners and drones.

Paragon joint managing director John Munday said: “When it comes to surveying, the property industry is a dinosaur that still uses slow, archaic processes. Embracing drone technology will be to the benefit of surveyors, developers, property funds and contractors alike.

“We have collaborated closely with Elliott on a number of projects, so we know just how transformational, impressive and effective his approach is. Drone technology is a game-changer for surveying, so we are very pleased to be leading the way and collaborating with our clients to benefit their assets and create commercial advantage.”

During construction projects, drones will also be used by Paragon instead of time-lapse cameras to give accurate and real-time measurements of the mass of the site, helping avoid disputes about progress.