Since the decline of the financial sector, the property industry has a new best friend: TMT. Property Week reports from the CBRE Spotlight event on a rare growth story. Photographs by Paul Burroughs 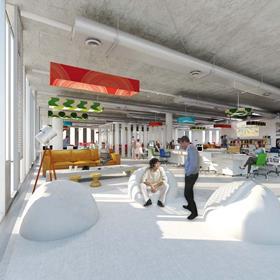 The clouds over London seemed to vanish as guests arrived on 18 May at the uber-fashionable Tea Building, home to private members club Shoreditch House, which boasts a bowling lane, rooftop swimming pool — and office space.

The area’s creative occupiers have breezily defied the worsening economic conditions affecting the UK, and were therefore the subject of the morning’s CBRE-sponsored Spotlight debate.

So it is only logical that London’s investors and developers are flocking towards the creative sector like Parisians to the French Riviera. And it is also unsurprising that a “Spotlight on TMT” breakfast event about the technology, media, and telecommunications sector was packed with property people wanting to find out more. 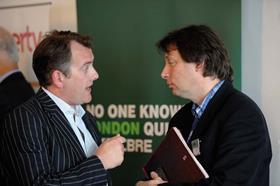 The prime minister announced in November 2010 that the area between Old Street roundabout and the Olympic Park had been earmarked as a location that could mimic California’s Silicon Valley, as a cluster for booming technology and innovation.

And this year, central London office demand from the sector reached 35%, CBRE research shows. This is the first time TMT demand has overtaken the level of demand from the banking and finance world (graphs). 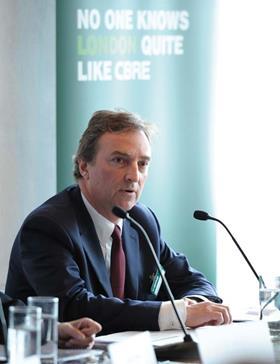 Besides Facebook, there are few better examples of this stellar growth than Google, which recently took a lease for incubator space on Bonhill Google UK property chief Joe Borrett was one of five guest speakers at the event, and he told the industry that TMT occupiers’ two biggest needs from landlords were sustainability and collaboration.

“I believe the areas entrepreneurs want to go to are all about ease of access to talent and easy access to networks,” said Borrett. “Our buildings
set out to provide internal flexibility for everyone, so they can support each other and collaborate.

“And for us, sustainability is not just about BREEAM ratings. It’s about air quality, carpets, ceiling — a lot of buildings have some fairly nasty materials in them.” 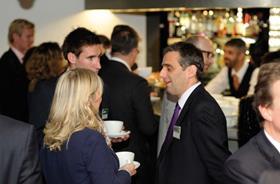 For London’s property developers, this translates into a growing need for flexible, well-designed space for a sector that is “in a hurry and needs to do things quickly”, said CBRE senior director Simon Calvert.

“Unlike professional services, where occupiers are service driven and cross-sell between the services, there are no silos in TMT. The work groups are more flexible and need room to adapt and to ebb and flow as they change their space requirements,” he explained. 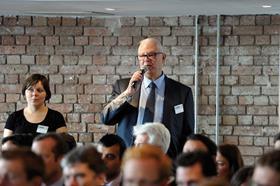 Sir Stuart Lipton talks from among the crowd

The consensus between guests was that a fundamental shift is taking place in the working patterns of the next generation. Derwent London director Paul Williams, National Infrastructure Planning Association and Soho Estates chairman Steven Norris, and legendary developer Sir Stuart Lipton all agreed TMT occupiers wanted to occupy properties where they could work, play, eat and even sleep.

Lipton, speaking from the audience, said: “We [the property industry] are building outdated products. People don’t want to work in big boxes in the City any more. These occupiers inhabit a world in itself, and east London is where it’s going.

Our buildings are set out to provide internal flexibility for everyone

However, Norris agreed with Lipton that the city is pushing eastwards. He said that London had already become the technology capital of Europe — it has 23,000 IT and software companies, compared with 15,000 in Paris, the next biggest hotspot. 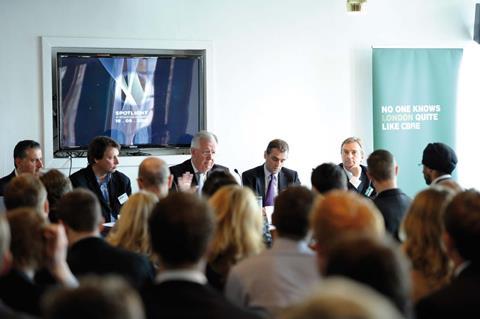 “We’ve embraced the creative industries since seeing financial services — one of the cornerstones of the London economy — decline,” said Norris. 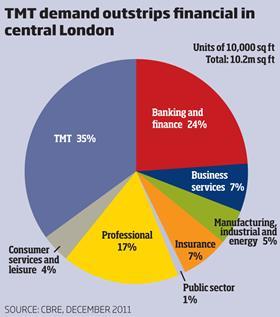 “Communication itself is changing the relationship between where you live and where you work. Young people don’t see the difference between home and work — it’s just an experience of life. It’s one of the most misunderstood things about this generation.”

One developer courts more admiration than most for the way it understands this generation.

Not only did London-focused REIT Derwent put Shoreditch on big-time property’s map with the Tea Building, it has holdings throughout Clerkenwell, Farringdon, Angel and Shoreditch, which are all natural environments for “creative” occupiers.

These occupiers inhabit a world in itself, and east London is where it’s going

Of Derwent’s take-up last year, 44% was from TMT occupiers, and a third of its portfolio houses them.

Williams said: “I don’t think it’s about ‘Tech City’ as such, but about London and London’s extraordinary talent. These people have different needs from traditional occupiers. Twitter, for example, took a six-year lease in San Francisco recently, on 500,000 sq ft of space.”

Derwent is adapting its buildings to fit the new demands. At its forthcoming 100 City Road scheme, it has introduced a concept to replace air conditioning with “concrete core cooling”. Not only is this more sustainable, it brings down the fit-out cost from £60/sq ft to £40/sq ft, making it more affordable for start-ups.

The government’s inward-investment ambassador to the area, Tech City UK’s chief executive Eric van der Kleij, said it was not too late for developers to seek similar opportunities to those that Derwent has made its own.

“There are no borders for Tech City but, if I were a developer, I’d be looking at opportunities on the edges of the cluster,” he said. “We need not only good office space, but the right kind of residential — most of these occupiers want to be within staggering distance of where they work.”

There are no borders for Tech City but, if I were a developer, I’d be looking at opportunities on the edges of the cluster

There are certainly worse places in London for investors and developers to put their money. As van der Kleij concluded: “It is one of the areas that is experiencing genuine growth — real growth in the challenging economic climate.”

And it is clear that the property industry will have to work hard to keep up.