​Green Finance Commitments are Scaled Up - Property Week and UKGBC’s COP Round Up: Day 3

For UKGBC, the key announcements from COP26 today were: 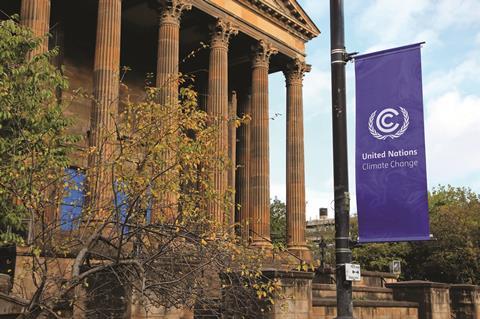 Rishi Sunak’s net zero transition plans: Under the new Treasury rules, financial institutions and companies listed on the London Stock Exchange must come up with net-zero transition plans, which will be published from 2023. The strategies will need to include targets to reduce greenhouse gas emissions and steps firms intend to take to get there.

To guard against greenwashing, a science-based ‘gold standard’ for transition plans will be drawn up by a new Transition Plan Taskforce, composed of industry and academic leaders, regulators and civil society groups.

Although the plans will need to be published, the government said the aim “is to increase transparency and accountability” and the UK was not “making firm-level net-zero commitments mandatory”.

Glasgow Financial Alliance for Net Zero (GFANZ): $130tn (£96tn) – around 40% of the world’s financial assets – is now being aligned with the climate goals in the Paris Agreement, including limiting global warming to 1.5C. The commitments have come from more than 450 firms from all parts of the financial industry, based in 45 countries across six continents, and have been delivered through the Glasgow Financial Alliance for Net Zero (GFANZ), which was launched by the UK.

Green Initiatives: The UK will also seek to address barriers to finance faced by developing countries with a series of new green initiatives funded from its international climate finance (ICF) commitment, including £100m to respond to recommendations from the UK co-chaired Taskforce on Access to Climate Finance.

Below 2°C? The Climate Resource analysis of new COP26 pledges puts projected warming at 1.9°C – the first time in history this figure is projected below 2°C.

“Addressing the current financial gap is key for implementation, so Rishi Sunak’s announcements today on the net zero transition plans are welcome. These plans are a critical step for ensuring net zero commitments align with action. However, it is vital there are common standards for what a ‘good’ plan looks like – we await the work of the announced Transition Plan Taskforce, which will be instrumental in fighting greenwashing and ensuring high-quality plans are produced.”

“We are somewhat disappointed that Sunak’s announcements did not require mandatory firm-wide net zero targets. It is crucial that standards be legally enforceable to level the playing field, ensure accountability and credibly shift the economy to net zero. Significant public investment is also vital for mobilising solutions at scale and supporting investment, particularly within the built environment.

“In the spirit of today’s financial announcements, we’re looking forward to launching UKGBC’s new report on Financing the Built Asset Adaptation Gap on Monday. The report will highlight the need to measure and communicate the benefits of nature-based solutions [NBS] more effectively to a wider audience, recognising the difficulty in instilling investor confidence in NBS within an emerging market and supply chain.”