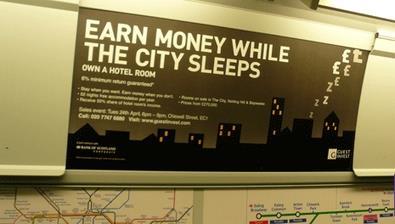 Nick Edwards and Nick Dargan at Deloitte & Touche's business advisory group were appointed joint administrators last night. they said they were 'assessing the position of the group in order to determine the best outcome for its creditors'.

GuestInvest was launched in 2004 and introduced the concept room of hotel rooms as an asset class. It has a number of hotels in Notting Hill and Bayswater.

Its most famous hotel is Anouska Hempel’s Blakes, which it bought last November. This investment has been secured. Joint administrator Nick Edwards said: 'The Blakes Hotel is unaffected by the insolvency of the GuestInvest Group. It is a very prestigious trading asset and is not subject to any form of insolvency proceeding. The Blakes continues to trade as usual, offering the same high standard of accommodation that its loyal customer base expects under the strong direction of its existing management team.'

Guesthouse West is not part of the GuestInvest Group and continues to trade normally.

The GuestInvest concept allowed private individuals or companies to buy a luxury hotel room, stay there for free for up to 52 nights a year as well as receive a rental income from its use during the rest of the time. Hundreds of private investors have invested in the concept.

In 2006 Bank of Scotland Corporate’s joint ventures’ team acquired a shareholding in GuestInvest in exchange for a debt and equity package worth £200m.

The administration will likely mean the collapse of Guestinvest’s plan to buy the Pennethorne wing of Somerset House to create a serviced hotel at the historic location form the Department for Culture, Media and Sport.

'The model was flawed as it split the existing income. Splitting the profit is a different story but giving away half your income is flawed. Secondly investors were given 52 days free and nothing is free. You still have to pay for servicing whether it is the owner or a paying guest in the hotel and that was a further hit on income. Hotel room investment can work but the Guestinvest model was not sustainable.'