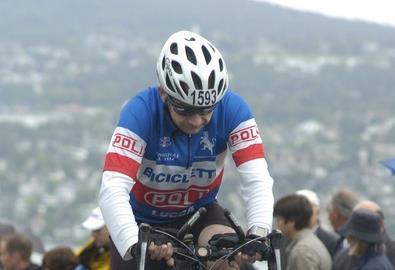 Andrew Mason, head of property at Halfords, has raised more than £3,000 for Action Heart by completing the Zurich Ironman in 14 hours 29 minutes and 55.5 seconds.

I arrived in Zurich on Friday lunchtime to bright sunshine and 26 c, people were swimming in the lake and sunbathing. By the time I had unpacked and put my bike together the clouds had come over and it rained all night Friday and more or less all day Saturday.

I spent most of Saturday trying not to do very much, registered and racked my bike on Saturday evening and went to bed as early as I dare after setting my alarm for 4 am. At 3 I woke to hear the rain still pounding on the hotel balcony, watched the forecast, which confirmed that there was going to be rain for most of the day!

Breakfast had been put on early at the hotel, as there were lots of competitors staying there. In the hotel’s garage there was probably around £30,000 to £40,000 worth of Carbon fibre! Breakfast was eerily quiet with not much talking, partly due to the fact it was only 4.30 am. I put on my tri suit and some clothes and made a final check that I had everything before putting on my coat and walking down to the start with the others.

Once there I laid out my kit on top of a big plastic bag they had given us to protect the bikes, and put another one on top to try to keep the rain off. I put my wetsuit and goggles on, and made my way (almost blind as I had to leave my glasses by my bike) to the start.

At 6.55 we got in the water, which was very warm, swam about 25m to the start line and at 7.00 the hooter went for the start. There were a lot of people but I only got hit a few times particularly going round the buoys, but otherwise it was a pretty uneventful swim.

It wasn’t until I got out that I realised it was still raining. I got back to my bike and put on my cycling shorts, long sleeved top and cycling top, all of which had managed to get soaked from the rain. Great, wet kit, still raining, 13c and 112 mile to go fantastic!

First 30 k was flat and reasonably fast, but cold and wet. Got to the first hill and was glad of the warmth going up it, but the knee problem I had developed two weeks before the event started to feature so I slowed down and it seemed to ease. I decided that I just wanted to finish within the cut off time, so I stayed really steady round the bike course and backed off any time I felt the pain coming on. There were a few big hills but nothing ridiculous. Apart from the cold, the rain and the knee, the bike was ok with plenty of support on the course with people, bands and music in most of the villages. The highlight being “Heartbreak Hill” where a 1000 or so spectators cheered , rang cow bells , made a load of noise with rattles etc and crowded along the road , in a “tour de France” style .

By the end of the bike, I wasn’t worried about the run. I had 6.5 hours left before the cut off, and my main thought was, great I can get of this bike at last.

The run was 4 laps, and the first two were great, about 1hr 5 and 1hr 10 respectively. Then on the third lap I started getting a pain in my right hip. I slowed down, got wet sponges at every feed station but eventually ended up running for 15 mins and walking for 5 mins until about 1/3 of the way into the last lap when I just had to start walking. I walked from then on, but managed to get through the pain to run the last 150 m past 1000s of spectators cheering the competitors on, and down the “finish shoot” with much relief that a very long day was over.

Whilst I was walking on the last lap I met up with a guy from Surrey. We both agreed that we wouldn’t be doing this again, I said the same thing on my way back to the hotel, the next day at breakfast, and when I got home on Monday. But now, a week or so later, a 2 hour ride on Sunday, ½ hour run yesterday and a swim in the week, I’m thinking maybe the year after next, somewhere warm …….. ??!!