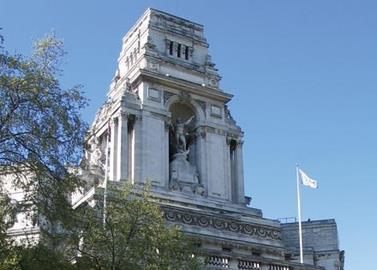 English Heritage concerned about scale and bulk of 10 Trinity Square

English Heritage has expressed concerns over a ‘six-star’ hotel scheme in the City of London by US developer Thomas Enterprises.

The grade II*-listed building at 10 Trinity Square – formerly the headquarters of insurer Willis and the Port of London Authority – was bought by Georgia-based hotelier Thomas Enterprises for around £150m in 2006.

Thomas Enterprises, which is run by US property entrepreneur Stan Thomas, plans a luxury hotel and high-end flats at the scheme.

However, English Heritage met with the developer on 20 March and said it was ‘yet to be convinced that the heritage benefits of the scheme would outweigh the harm it causes to the listed building. We have expressed concerns at the proposed roof extension, which, by virtue of its scale and bulk, would harm the special interest of the listed building’.

Thomas Enterprises’ plans to convert and partially restore the building into a ‘high-quality hotel with flats contained within a modern roof extension’ are welcomed by English Heritage.

The heritage watchdog said that ‘the approach to restoring and conserving the most significant parts of the historic building’ were fine in principle, but that it was concerned about the ‘scale and bulk’ of the scheme.

English Heritage hopes to arrange another meeting with Thomas Enterprises in the next few months to discuss a ‘less-intensive hotel conversion scheme’.

The developer is yet to submit a planning application for the scheme to the City of London corporation.

English Heritage’s view is a further blow to Stan Thomas, who lost a High Court battle to prevent a rival hotel scheme from being developed in the area last year.

Thomas wanted to stop City Inn building a hotel on the nearby Mariner House site, but failed to prevent the development.

Planning firm DP9 is advising the Russian owner on the scheme.