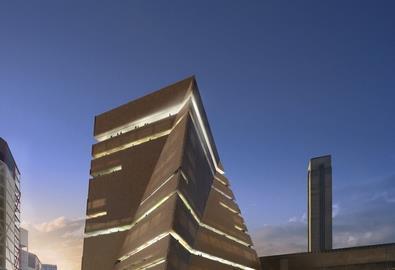 The plans follow a revised brief and consultation with artists and the Tate Modern’s curators.

The main design element of the updated plans will see the oil tanks of the former power station retained as ‘raw spaces for art and from which the new building will rise’.

In the previous scheme the oil tanks were occupied by an auditorium and other facilities.

It said the oil tanks will lead directly into the turbine hall and the interconnecting spaces will become the foundation of the new Tate Modern.

The architect said: ‘This closer relationship between the buildings is expressed in the façade, which uses brick in a radical new way by creating a perforated brick screen through which was the building will glow at night.

'The building is more compact than in the previous scheme which built up of stacked boxes and the configuration is more flexible to allow for future changes in the programme.’

The new design with include more varied spaces for Tate's growing collections and better facilities for the gallery's learning programmes. The new building will rise 65m above ground in 11 levels and will add an additional 231,400 sq ft to Tate Modern's existing 376,370 sq ft of space.

There will also be a new north/south route through the building linking Southwark to the City of London and this route will be open 12 hours a day.

Two new public spaces will be created – a southern square modelled as a city piazza with the potential for special commissions and performance, and new gardens to the west designed for families and children.

Herzog & de Meuron said the new design will help the Tate Modern deal with visitor numbers that now exceed more than 5m a year. The project is due to be completed in 2012 at estimated cost of £215m at 2012 prices.

To date Tate has received £50m from Government, £7m from the London Development Agency and £13m from the private sector towards the overall costs.