House prices forecast to rise by 17% over next five years

House prices are expected to rise by 17% on average across the UK over the next five years - so long as mortgages rates do not rise above 4.5%, according to Savills.

The agent’s latest residential forecast said the growth would be driven by a rise of 21.6% in the South East and 21% in the East of England, with the mainstream market in London expected to post a rise of 15.3%. 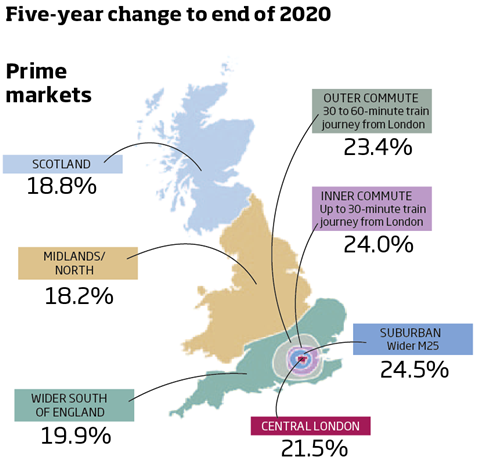 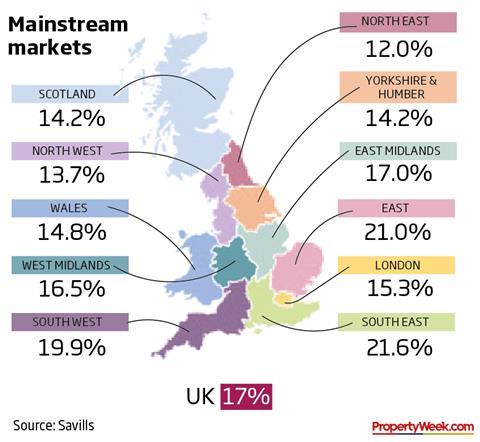 But Savills cautioned that a sharp rise in interest rates could dampen the growth. “Much depends on the speed at which interest rates rise,” said Lucian Cook, head of Savills residential research. “If rates rise too quickly mainstream house price growth will be quickly curtailed. On the flip side, if rates remain low for too long, there is a risk that prices will rise too far, creating affordability issues further down the line when they do eventually rise.”

Cook said recent mortgage regulation, which had introduced stress testing for affordability, had capped the amount people could borrow relative to incomes and would rein in runaway price growth.

“That is likely to cap price rises, particularly in London, where house price to household income ratios are highest, thanks to growth seen over the past 10 years,” he said.

The report also showed prime residential markets were set to enjoy solid price growth over the next five years, driven by a forecast increase of 24.5% in suburban London.

Savills said lower value outer London boroughs had greater capacity for house price growth than the higher-value parts of the capital, having grown in line with the South East and East of England, rather than London itself in recent years.

Walthamstow and Lewisham were expected to show the strongest growth, outperforming the mainstream submarkets of areas such as Hammersmith & Fulham and Richmond.

Beyond the South and East of England, Savills said growth would depend on the strength of regional wealth generation and the ability of cities such as Manchester and Birmingham to act as catalysts to reinvigorate their housing markets.

Annual transaction levels, at just over 1.2m this year, are expected to reach 1.3m in 2020, far short of the pre-crunch norm of around 1.7m, as a lack of affordability slows demand.