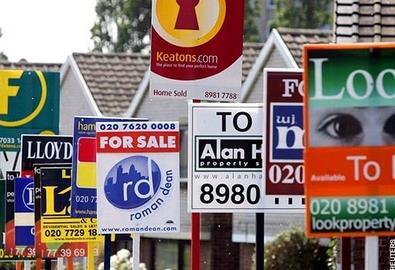 House prices have fallen by 2.5% during March according to the Halifax - the biggest monthly fall since the 1990s house price crash.

Britain's biggest mortgage lender said the drop was the largest since September 1992.

House prices are now just 1.1% higher than they were a year ago, the slowest rate of annual growth for 12 years.

Martin Ellis, Halifax chief economist, said: 'This fall is continuing the pattern whereby the market is readjusting. Sellers are having to adjust the price they ask for their properties.'

The group said homes had lost 1% of their value during the first quarter of 2008, to leave the average property costing £191,556.

But there has been huge regional variation within this figure, with house prices in the West Midlands falling by 5% during the first three months of the year, while property prices have dropped by 4.7% in Wales and by 2.6% in the South West.

There were also price falls of 1.5% in Northern Ireland and drops of 0.5% in both Yorkshire and the Humber and the North West. But at the other end of the scale house prices rose by 2.2% in the East Midlands, 1.6% in Greater London and by 1.4% in East Anglia.

House prices are now lower in three regions of the country than they were a year ago, with the average home costing 5.3% less in Wales, 3.7% less in the West Midlands and 3.3% less in the South West.