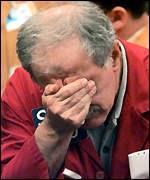 US stocks suffered their worst one-day fall since the 1987 crash on Monday, after the House of Representatives shocked investors by voting to reject the Bush administration’s $700bn (£387bn) bail-out plan.

The vote effectively torpedoed unprecedented government interventions to quell the fear in the financial markets which had earlier seen five US and European banks rescued or nationalised and the world’s central banks unleashing a gigantic global liquidity operation.