Housing minister Dominic Raab MP has been appointed as the secretary of state for exiting the European Union after incumbent David Davis resigned late on Sunday night. 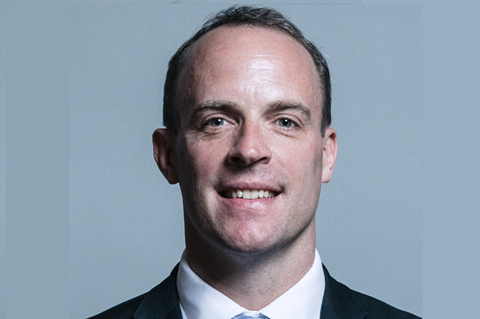 Raab was promoted to minister of state for housing at the Ministry of Housing, Communities and Local Government in January, and was previously minister for human rights at the Department of Justice.

His replacement will be the fourth housing minister in two years.

During his short time as housing minister Raab announced £45m to fund the building of homes on council-owned land and said new powers were being considered to manage unauthorised traveller encampments.

Before being elected to parliament as the MP for Esher and Walton in May 2010, the Oxford-educated lawyer worked for a City law firm where he covered project finance and competition law. He also worked in Brussels advising on EU and World Trade Organisation law and headed up the war crimes team at the Foreign Office.

Johnny Caddick, managing director at Moda: “This extraordinary circus of housing ministers continues. The government needs to prove that it’s not focusing on Brexit at the expense of everything else. It’s vital we have continuity in the role and a reality check about the vital role build-to-rent needs to play. We need a new minister to continue the great work Gavin Barwell did in supporting investment and in ensuring we have the necessary skilled workforce to build all the homes politicians keep promising voters.”

Grant Lipton, co-founder of Great Marlborough Estates: “The instability caused by the constant swapping-and-changing at the Ministry of Housing, Communities and Local Government has caused much uncertainty for the industry, and we need firm steer on the government’s plans to help deliver the homes - of all types - that Britain desperately needs.”

Ishaan Malhi, founder of Trussle: ”What’s abundantly clear is that we desperately need not only innovation, but continuity of leadership and a strong hand willing to be brave on policy. Instead, what we have is a government that doesn’t seem to be taking the issue seriously and an unstable Housing post. In a month’s time, we were expecting to see major policy changes via the National Planning Policy Framework. How can the public believe that any proposal will be delivered when the people who make them never stick around?”

Paul Smith, managing director of Strategic Land Group: “This latest mini re-shuffle has given us our eighth Housing Minister since 2010 - and the third in 2018. While the government keeps insisting the housing crisis is one of its top priorities, the constant churn of ministers paints a different picture. No sooner has a minister got to grips with the portfolio, then they’re moved. That is, in large part, a consequence of the junior status of the post. Impress and you’re quickly promoted out, struggle and you’re replaced by another potential rising star at the next re-shuffle. If the government is serious about addressing the housing crisis, then keeping the minister in post would be a good start.”