Invesco Real Estate has forward-funded EcoWorld London’s two BTR sites in the capital, which are valued at almost £400m, on behalf of a North American pension fund client. 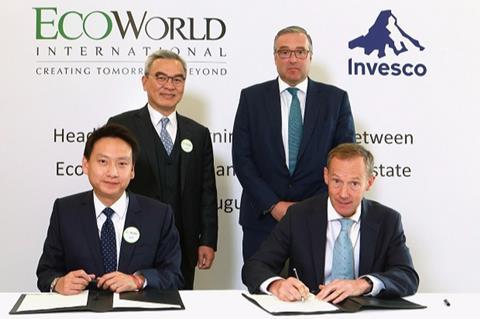 The deal will see the Malaysian developer build more than 1,000 BTR homes on two sites in Kew and Barking, with planning permission for both already agreed.

Construction is underway on the developments and is expected to complete in stages from 2020 onwards. EcoWorld will take on the long-term management of the assets following completion.

EcoWorld London chief executive Heng Leong Cheong said the deal highlights the “immense opportunities” in the BTR sector, “and represents an important new engine of growth for EcoWorld London and the UK, despite the potential challenges of the current pre-Brexit market”.

He added: “There is undeniably a significant shortage of quality homes in Greater London, in particular homes catered specifically for the rental demographic. Our build to rent business model allows us to scale up quickly and to work on multiple projects concurrently, which means we can provide a substantial volume and variety of much-needed homes in Greater London sooner.”

EcoWorld International executive vice chairman, Tan Sri Dato’ Sri Liew Kee Sin, said the business has targeted the BTR sector as a key growth driver for its UK presence, and that it intends to agree similar deals in the future.

“We have already received expressions of interest from other funds, particularly from Asia, keen to pursue potential investments into the UK build to rent sector,” he added.

The developer and Invesco have now entered a period of exclusivity, with the final contractual details scheduled for conclusion at the end of October.

“The two investments at Kew and Barking provide an opportunity to create “best in class” purpose built residential product which is suited to today’s expanding rental market in London. They are key to our growing UK residential investment programme, which is now approaching £1bn.

“As we continue to see the average person being priced out of the owner occupation, with EcoWorld London we have developed a product which is tailored to the local rental markets of Kew and Barking where we see strong tenant demand for BtR and a limited availability of rental units.”