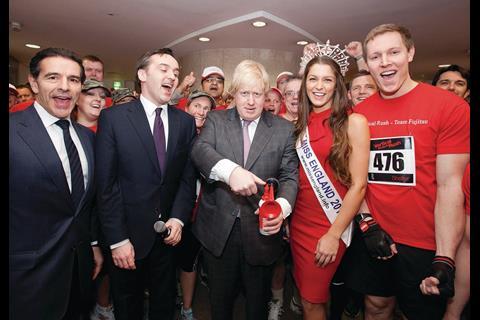 Mayor Boris Johnson and Miss England 2013 cheered on the runners 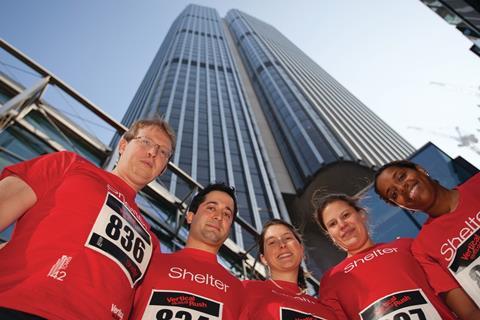 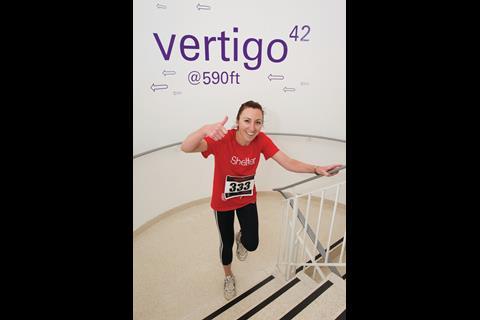 More than 1,000 runners with a spring in their step took part in the fifth annual Vertical Rush challenge at Tower 42 in the City of London on 5 March.

London mayor Boris Johnson cycled past the tower for the event, dismounting from his bike to sound the klaxon and offer a few rousing words.

Johnson asked an assembled batch of Shelter’s red T-shirt-wearing contestants before the ascent: “What are your legs made of?” to which the crowd replied in unison: “Jelly”. The baffled-looking mayor answered: “Springs
of steel was the answer I was looking for! Springs of steel!”

Most of the participants reached Tower 42’s 600 ft summit in less than 15 minutes. All runners were chip-timed for accuracy.

The first team climbed Tower 42 at 7.30 am, and by the time the last team finished, the runners had collectively climbed 1 million steps — which equates to circling the M25 almost one and a half times.

Teams from City firms KPMG, Fujitsu, Legal & General and Berkeley Group took part in the event. After reaching the top floor, runners were afforded a magnificent 360-degree view of the capital in the sunshine — although some collapsed on the floor before managing to take in the vista.

One participant, Paul Smith, bettered his first vertical mile of nine ascents last year by scaling the tower 10 times in succession this year.

Property Week guest blogger Geraint Anderson, aka “City Boy”, was a participant in the 2.30 pm climb.

An athletic-looking Miss England 2013, Charlotte Holmes, was on hand to spur the runners on at the start of the race and quench their thirst at the end by handing out water at the top.

Campbell Robb, chief executive of Shelter, said: “Our amazing runners have raised hundreds of thousands of pounds and helped us reach even more families facing homelessness — so those 920 steps might just be the most important ones in London.”

Shelter reports there are more than 70,000 homeless children in England living in temporary accommodation — and 3.6 million children in the UK live in poverty after their housing costs have been paid.

Read the latest entry from our guest blogger Geraint Anderson, aka City Boy, on our website at propertyweek.com/comment/blogs/