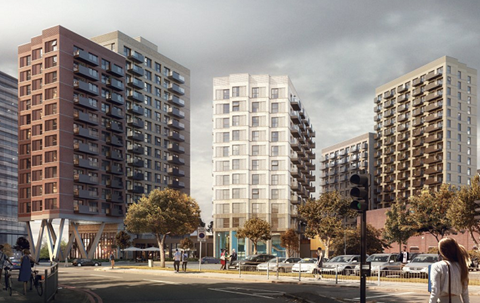 Khan used his mayoral powers to ‘call in’ the scheme, which is located on the site of a former Citroen car dealership on Capital Interchange Way, following the council’s decision in February.

Since that time L&Q has raised the level of affordable housing on the site from 40% to 50%. A total of 218 of the homes will be affordable, including both shared ownership for first-time buyers and homes based on social rent levels for households on low incomes.

In addition, the approved scheme includes a review mechanism which means that if building is not ‘well under way’ within two years of the permission being granted, the developer could be compelled to provide further affordable homes.

When Hounslow planning officers turned down the scheme, they had cited concerns including the impact on historic buildings in the world heritage site at the nearby Royal Botanic Gardens Kew.

Speaking about the decision, Khan said: “This scheme shows how we can unlock the potential of an underused site to build more of the genuinely affordable homes Londoners so urgently need.

“I have carefully considered the impacts of these plans – particularly the effect on historic buildings in nearby Kew Gardens – and have concluded that the benefit of delivering more than 400 homes, including 218 genuinely affordable homes, justifies granting permission.”