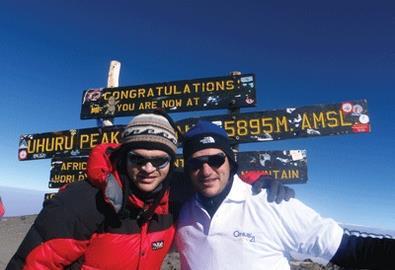 Why we chose Mount Kilimanjaro:

It has been our dream to climb Kilimanjaro for many years now. It took a long time for the plan to come to fruition but after a lot of research and planning it was arranged. Due to the severe nature of the climb the best way is to be amongst professionals who have experience.

Nick wasted no time and soon found a very suitable partner. Charity Challenge UK. Charity Challenge has established an incredible infrastructure for running numerous and varied group adventure travel expeditions. Charity Challenge has also achieved real credibility and awareness within the charity sector and accomplished very promising results not only for the organization but for charities, participants and local communities too.

The experience & the summit climb:

Our group consisted of 16 people from all over the British Isles and from all walks of life. We started out in the foothills and slowly made our way up to the rain forest, which over a series of days led on through giant heather forest, alpine dessert and then increasingly extreme conditions. As a group we shared most days together, each day our bond would grow as we gave each other vital support. Days were tough.

On average we would walk four hours in the morning, break for lunch and four hours in the afternoon. For our summit day we were to leave at midnight and journey through darkness, only to have our path lit by the shining bright stars above the African continent and southern hemisphere. It was six and a half hours until the sun rose, revealing the plains below in a beautiful light. The jagged volcanic vents of Mawenzi (Kilimanjaro’s other summit) looked distant and in peace.

The wall as it is described is when you’ve given it all you’ve got and you just can’t go on. But the point about the wall is you have to break through it in order to reach your goal. Our group goal was to reach the summit and raise money for very worthy charities.

This is what gave everybody in our group the motivation and determination to succeed no matter what. You can do as much training as you like and be as fit as you can imagine, but at this point there is only one thing that will see you through. Raw mentality.

A back to basics approach. Simply, one foot in front of the other. Despite this tough challenge I am proud to say that everyone in our group summitted.

At a time when we were unaware of what was going on in the “real” world we had to rely on only ourselves and the support from our group. There is nothing like the feeling of succeeding in a feat that will test every part of your body and mentality. The summit was astonishing, the roof of Africa and pure beauty in every which meaning – The sweet smell of victory.

In the winter of 1994 our mother was diagnosed with melanoma cancer.

Treatments began with chemotherapy. In 1995 and 1996 as the cancer began to spread our mother was in and out of hospitals for chemotherapy and vaccines. In the end the doctors weren’t able to save her and she lost her race for life on December 1st 1996.

Being so young at the time played a vital role in how we would come to terms with the tragic death of our mother over the next few years. Being 18 (Gavin) and 22 (Nick), we feel that it was not really until many years after that we began to come to terms with it.

Since then, many more family members, friends and people we know have either been diagnosed with cancer or died. With Cancer steadily becoming the number 1 disease killer globally we wanted to do something to help and do it in our mum’s memory. Nick had chose cancer research UK as they are the most reputable organization and renowned for their progress.

However, Gavin felt that he would like to be able to see a bit more about where the monies raised would go and to that affect Cancer Trust Research Team had made an appeal for $1.7M in order to build a new chemotherapy wing at the hospital they are based, Mount Vernon, Northwood, Herts.