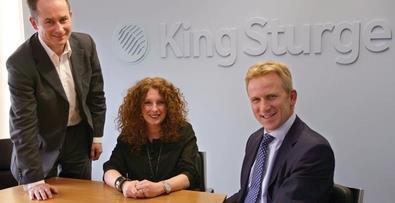 Scottish retail agent Fiona Hamilton has sold her company, Hamilton Glen, to King Sturge, in the latest sell-off of a retail agent to a big firm.

Hamilton and three partners Douglas Hogg, Colin Cammidge and Terry McFarlane – will join King Sturge as partners. Hamilton will become an equity partner with effect from 1 May.

The team will move into King Sturge’s 145 St Vincent Street offices in Glasgow by the end of the month, joining head of Glasgow Norman Pollock, and bringing King Sturge’s national retail team close to 60.

Earlier this year King Sturge bought retail agency Leslie Furness and has planned an expansion into retail over the last few years.

Mark Perowne, managing partner, said: ‘Getting into retail in a bigger way has been a long-term objective.

‘With the recent consolidation of niche retail practices over the past two years selling to larger firms, it has been about trying to find the right ones.’

Talks between Hamilton and King Sturge began at MIPIM last year and a deal was agreed last month.

The sale of Hamilton Glen coincides with the increase in the Capital Gains Tax rate to 18% that comes into force on Sunday. The rate change was not the reason for decision to sell, but it did affect the timing of the deal.

Hamilton, whose clients include Forth Ports and Wilson Bowden, said: ‘This is obviously a big decision. I feel King Sturge has an entrepreneurial flair and this decision gives me a bigger platform and acts as a springboard into Europe.’

Perowne said: ‘There are uncertain times ahead but it is across the economy, not just retail.

‘Very often when times are good it is difficult to buy into a new business and, traditionally, King Sturge has expanded rapidly in a downturn for instance, in the early 1990s. Currently it is actually not as bad as we had feared at Christmas. Retail spend is holding up.’

Hamilton added: ‘We’ve seen it before and it will sort the men from the boys. We started in 1991 and it is this market where you need good skill sets and a more considered approach.’