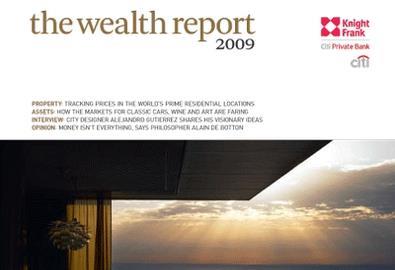 The 2009 edition of The Wealth Report, the third such collaboration between Knight Frank and Citi Private Bank, indicates that luxury house prices have fallen around the world, but super-rich appetite for property remains undimmed.

• The latest results from the Knight Frank Prime International Residential Index (PIRI) show that just under 50% of the locations featured managed to record positive price growth on an annual basis in 2008. By the final quarter, however, price growth had either stalled or fallen in 75% of locations.

• According to PIRI, prime property in Monaco is the most expensive in the world costing an average of €55,000 per square metre for the best properties. London and Manhattan are placed second and third.

• Despite house price falls, the Knight Frank/Citi Private Bank Attitudes Survey shows that almost 55% of High Net Worth Individuals (HNWIs) plan to increase their exposure to residential property over the next two years.

• Global farmland prices started to slip last year on the back of falling commodity prices, but remain more resilient than residential or commercial property, according to preliminary findings from the Knight Frank Global Farmland Survey. Exchange rate fluctuations mean affordability in some countries has increased for US dollar and euro-backed buyers, despite strong price increases in local currencies.

Liam Bailey, head of residential research at Knight Frank, said: 'The Wealth Report, produced in conjunction with Citi Private Bank, is released at an opportune time. Covering a period of global wealth destruction rather than creation, the report’s annual analysis of prime residential property markets and the behaviour and attitudes of the wealthy has become even more relevant.

'Even the world’s richest people have cut their discretionary spending and most desirable prime residential property markets have now been affected by the global downturn. Although almost half the locations in Knight Frank’s Prime International Residential Index managed to show a positive overall return in 2008, price growth had either stalled or started to decline in nearly 75% of them by the end of the final quarter. '