WeWork’s deal to open its first workspace in Glasgow at 50 Bothwell Street has fallen through, Property Week can reveal. 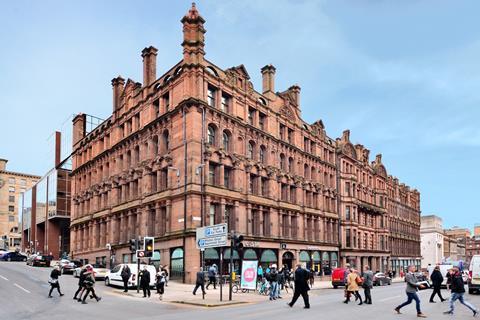 Property Week understands that the letting collapsed because the landlord FORE Partnership had concerns about the strength of WeWork’s covenant following its failed flotation in September and subsequent rescue deal with SoftBank.

WeWork had agreed to take all the office space at 50 Bothwell Street in the summer and it is understood that work to fit out the new office had already begun when the decision was taken to abandon the deal.

The 77,000 sq ft office building is being redeveloped by FORE, which acquired the property in partnership with Kier Property in 2016 for £23m.

Basil Demeroutis, managing partner at FORE Partnership, declined to comment directly on 50 Bothwell Street, but said: “Clearly there are concerns about the strength of the WeWork covenant and it will take some time for landlords and lenders to work through that and feel comfortable in dealing with them again.

“There is a lot of negativity around WeWork right now and it would be easy to pile on – and yes the business does have problems that can be solved only with dramatic action. But we still absolutely believe in the bigger story.

“WeWork is part of a meta trend across industries, geographies and cultures, where consumers are shifting to buying services and outcomes, not assets. We firmly believe that the real estate of the future will be defined by the creation of spaces that actively enable connections between people - connections we now struggle to make in modern society.

“The trajectory is clear – and to its credit, WeWork saw this shift early and helped shine a light on it. But clearly the execution of their model has been flawed.”

A WeWork spokeswoman said: ”We’re committed to the EMEA region and to our strong community here. We consider many buildings across markets in which we’re located but of course may not decide to proceed with all of them. We look forward to continuing to work with the real estate community to bring great office space, design and amenities to market.”

The news comes as WeWork’s new management team looks to slash costs in order to stem the group’s losses. Bloomberg reported earlier today that as part of these efforts, WeWork was embarking on a review of its expansion plans in London.

The flexible office provider is reportedly reviewing whether to proceed with about 28 potential letting deals in the capital.

“London has always been a fantastic market for us and we continue to see strong demand here,” said the WeWork spokeswoman.

The agents on 50 Bothwell Street are Knight Frank and CBRE.