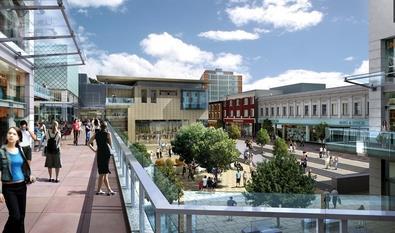 Lend Lease has pulled out of a £500m plan to redevelop the Bridgefield town centre area of Stockport in the north west.

It had intended to submit a planning application in Spring this year and construction was expected to start in 2010.

However, the council said Lend Lease pulled out of the plans on Friday.

Stockport Leader Cllr Dave Goddard has asked Lend Lease’s UK deputy chairman Robin Butler to attend a meeting next week to give a full explanation on the reasons for its withdrawal.

Cllr Goddard said: ‘I am bitterly disappointed that Lend Lease is not moving forward on this incredibly exciting project. I want to know why Lend Lease have let down Stockport after years of negotiation and investment. This is a prestige site which offers major opportunities to the right developer.

‘Stockport is an active, ambitious borough moving forward on a range of investments. We're benefitting from the £13m redevelopment of St Peter's Square, we have Sainsbury's as the development partner for Knightsbridge and there is amazing investment in our colleges. The building cranes have started to arrive.

‘Lend Lease have invested millions of pounds in consulting and preparing plans. But on Friday afternoon they told us they could no longer proceed. We all understand the credit crunch is having an effect but their action is bitterly disappointing.’

He said Lend Lease’s decision was ‘obviously a setback but we are big enough to deal with it and we are determined to move forward positively’. Goddard said the council had started actively appraising future options for the site.

A Lend Lease spokesman said: ‘Lend Lease has committed significant time and resources to progress proposals for the redevelopment of Stockport’s Town Centre and it is with much reluctance and regret that we are not able to take this scheme forward.

‘As a result of the deteriorating and unfavourable conditions prevailing in the retail development market, Lend Lease will not be pursuing the development opportunity at Bridgefield. We have advised Stockport Council that Lend Lease should no longer be considered as preferred developer for the Bridgefield scheme.’

‘Lend Lease remains supportive of Stockport Council’s regeneration proposals and its aspirations for the Bridgefield site and this decision does not affect the other projects within the Lend Lease development programme’.

Lend Lease has been hard hit by the downturn in the UK property market, particularly the residential sector. Earlier this month Lend Lease said its profit after tax in the current year to June was expected to reduce to A$265.4m (£125m) compared with A$497.5m (£235m) in 2007.

It wrote down the value of its UK residential business Crosby Lend Lease by A$121.5m (£56m) because of ‘continuing difficult market conditions which could see further pressure on residential sales prices and volumes’.