Malthouse calls on industry to ‘allow ambition to let rip’

The housing minister Kit Malthouse has called on the property industry to “allow its ambition to let rip”, in his first speech to the industry. 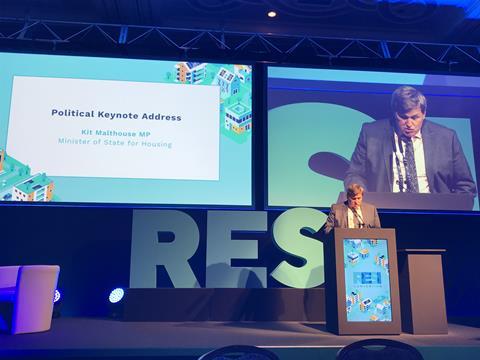 Speaking at Property Week’s RESI Convention, Malthouse said that his housing mandate from the prime minister was “more, better, faster,” and that he wanted the industry to bring him ideas about how to increase housing supply.

“Bring me your ideas, we are open to new thinking whether that is on finance, planning or whatever,” he said. ”We want 1,000 flowers to bloom in terms of tenure, developers, innovation. We need a big, vigorous, vibrant market to deliver the houses we need. We can innovate and I think you must as well.

“If we can get to this big vigorous vibrant market in which you all compete and you allow your talent and ambition to let rip, those of you particularly who are halfway down a big organisation - have the courage to go out and do your own thing.

“The message that I want to pass to you is ‘thank you’. You are increasing your output and the numbers are moving in a good direction.”

But he also warned developers not to become “the Kodak of the housebuilding industry”, urging them to embrace new innovations and adapt to new technologies.

“We have the technology and the momentum to deal with decades of under investment in housing, which was exacerbated by the crash in 2007-8,” Malthouse said.

He acknowledged that the housing market was complex, but also said that he believed the public perception of housing development was beginning to change.

“We also have different stratifications of society that want to occupy homes in different ways so it is very complicated. But I do think we are at a particular moment which is very advantageous to us. For the first time for a long time, everyone’s incentives are aligned. That includes the general public, so the Nimbyism we used to see is declining very rapidly. The baby boomers are recognising that their children and grandchildren cannot access the housing market in the way they did.”

Speaking about market conditions more generally, Malthouse, who voted to leave the European Union, said he was “naturally optimistic” about the UK’s future prospects.