Prime minister Theresa May has announced that a general election will be held on 8 June. 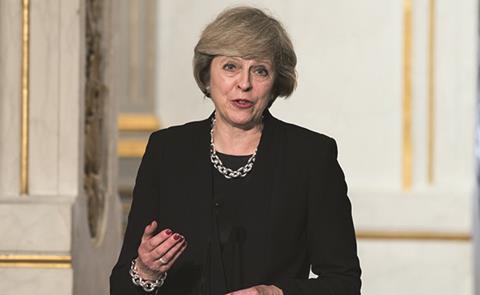 In a speech outside Downing Street this morning, May said that the election was being called because “division in Westminster will risk our ability to make a success of Brexit”.

She added that, while she had initially opposed an early election, it was “the only way to guarantee certainty and security for years ahead.”

MPs will vote on a motion for the early election tomorrow, and two-thirds will need to back it for the election to go ahead.

Early reaction from the property industry has welcomed the potential for a clear government mandate to deliver Brexit, but warned that the election could cause a short-term delay in market activity.

Jon Neale, head of UK research, JLL: “The announcement of a snap general election on 8 June is a genuine positive for the UK property industry. It will mean that a general election is no longer likely to coincide with the end of the two-year negotiating period following the triggering of Article 50. The Prime Minister will now be under less pressure to ‘deliver Brexit’ by 2020 - making a transitional phase more likely. The threat of UK businesses having to face a ‘cliff edge’ - a fall back to World Trade Organisation trading rules and full customs controls with the European Union - has retreated.”

Walter Boettcher, chief economist, Colliers International: “With the calling of a snap general election, a new date has been entered into the European calendar of uncertainty. However, the long-term benefits of a clear governmental mandate to investors and occupiers will far outweigh the short-term hiatus in decision making that is likely to follow this announcement. Solid deals, already in progress, are likely to progress. New deals may slow between now and the election. Will the government receive the mandate that it plans? Given recent events, all bets are off.”

Mark Quinn, managing director of Quinn Estates: “Calling a snap election is the right thing to do. While no one in business wants uncertainty, everything has changed since the last election in 2015. This general election, if parliament approves Theresa May’s plan on Wednesday, is a once in a generation chance for parties of all political colours to show real vision and then deliver. For businesses, like ourselves, that’s about sweeping away bureaucracy and the red tape around our planning system which is doing so much to hold back the UK’s potential.”

Lewis Johnston, parliamentary and public affairs manager, RICS: “Whilst Theresa May’s stated intention this morning was to provide greater clarity and stability by calling a general election, in the immediate term the move inevitably puts a question mark over policy and creates further uncertainty across the built environment. It is now the responsibility of all parties to set out clear policy proposals across land, property, construction and infrastructure to ensure the UK can deliver the homes, infrastructure, factories, offices and major building projects it needs to thrive.”

Ed Cooke, chief executive, Revo: “The retail and property markets have been clearly impacted by political and economic uncertainty since last June, and generally speaking stable political systems benefit long term business decisions. The focus, rightly, will be on how a general election impacts the UK’s negotiations to leave the EU - but it should not be overlooked that already in 2017 we have seen the government outline flagship policies to repair the UK’s housing market and stimulate growth through its industrial strategy. Irrespective of the general election result we hope the momentum to implement these policies, which have place-making and community investment at their heart, continues apace after June.”

Mark Farmer, chief executive, Cast: “Whatever the outcome of this election, the construction skills gap will remain as will the impact of Brexit. In the campaign to come, I hope to see some serious solutions on offer as part of the main parties’ manifestos that adequately reflect the importance of the construction industry’s welfare and future modernisation as part of its contribution to UK plc. We need to also preferably see a reasonable level of cross party consensus on a coherent and comprehensive skills and innovation agenda that is not interrupted by endless political turmoil!”

Richard Garner, head of the commercial and capital markets agency, Daniel Watney: “We cautiously welcome today’s announcement by the prime minister that she intends to call a general election. A snap election creates the opportunity to remove the uncertainty we face in years of negotiations with the EU and the government’s narrow parliamentary majority. Any chance to provide greater certainty at a time when investors are uncertain of the consequences of Brexit can only be positive for the London office market.”

Geeta Nanda, chief executive, Thames Valley Housing: “The election is an opportunity to update or even scrap old manifesto pledges that are untenable or proving difficult to deliver on. Buy to let investors, stung by higher stamp duty and taxes, will be hoping for a reprieve. The real vote winner would be to offer tax breaks for longer, stable tenancies for those in private rent – a move which would benefit tenants and landlords alike.”

David Smith, policy director, Residential Landlords Association: “As the campaign progresses, this election needs to put housing first. Over recent years, the private rental market has been hit by tax hikes, benefit cuts and growing regulations all of which are making it more difficult for tenants to access and afford a place to live.”

Mike Trainer, partner, Gowling WLG: “I think this will lead to the market stalling until the election outcome, as although a Tory win seems highly likely, the recent Brexit vote and the election of Trump is evidence that the probable result is not necessarily the inevitable one. I suspect that the market will await the certainty of the outcome. However, as the result will not be known until early to mid-June, there is always the possibility that the market will then await its return from the summer holiday period, as happened with the Brexit referendum. A Tory win may accelerate this, as it will be a return to the new Brexit norm and a 5 year Tory term will, one suspects steady the market.”