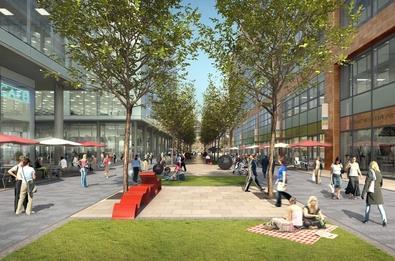 The developer, in partnership with Manchester City Council, will rebrand the Central Spine as First Street and redevelop the entire 20 acre scheme.

The scheme will include creating the first new pedestrian street in Manchester for several decades, connecting Hulme through the Mancunian Way to the Hacienda site on Whitworth Street West.

It will also include five new public squares; the first BREEAM Excellent building in the city, an 180,000 sq ft office; a new retail destination; and a ‘green wall’ – Europe’s largest vertical garden.

Located on the southern edge of the city, First Street Manchester will include 1.8m sq ft of offices, 1,500 homes and 350,000 sq ft of retail and leisure space.

The new name and logo – nomoregreydays.com – was revealed by Ask Developments chief executive Ken Knott at MIPIM, in Cannes.

Ask and Manchester City Council want the development to become a global exemplar in sustainable mixed use communities. Work has already begun on the first phase of the scheme, the 180,000 sq ft BT building representing an initial investment of £115m.

Ken Knott, chief executive at Ask Developments said: ‘Our vision is for a dramatic new quarter to extend the heart of this great global city from this historic railway viaduct to the Mancunian Way.’

Sir Howard Bernstein, chief executive of Manchester City Council, said: ‘We welcome the energy and innovation which characterises this new vibrant initiative by Ask. Our continued capacity to deliver growth will depend upon bringing forward exciting new quarters such as this and we have every confidence that in working with Ask, the area will become a major part of an increasingly successful regional centre.’