MORNING AFTER: The topping out of St David’s 2 in Cardiff 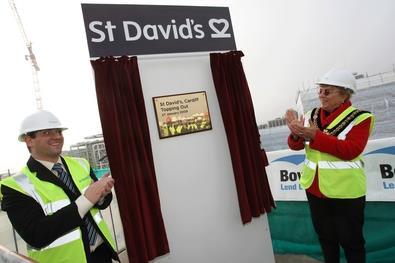 More than 150 people gathered in Cardiff earlier this week to celebrate the topping out of St David’s 2 which, at 967,500 sq ft, will be the largest shopping centre to open in the UK this year (2009).

Local dignitaries, construction bosses and key members of the development team, scaled over 200 stairs to the roof of the development where Lord Mayor Councillor Kate Lloyd unveiled a commemorative plaque and a symbolic final piece of concrete flooring was laid by Cardiff Council Leader Rodney Berman.

Following the ceremony guests were given the first glimpse of the spectacular, glass roofed Grand Arcade, which will house the majority of the scheme’s 100+ new shops.

At 205 metres long, Grand Arcade is big enough to house the Sphinx or the body of a jumbo jet.

Everyone then got the chance to raise a glass to the development at a drinks reception and buffet lunch held at the Cardiff International Arena.