Developer First Base and investor Patron Capital have received planning consent for their £100m mixed-use redevelopment of the former AMEX House in Brighton. 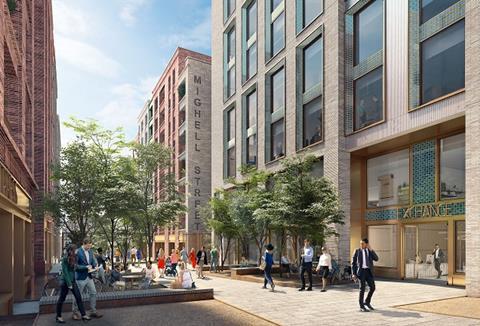 Brighton & Hove City Council has approved the JV’s plans for a mixed-use scheme at the two acre site in Edward Street incorporating 160,000 sq ft of Grade A offices alongside space for independent food and beverage stores and 168 new homes. The residential element will comprise a mix of private and affordable units and sit alongside 130 new trees and 45 plant species in three new public spaces designed by landscape architects Spacehub who are working alongside overall scheme architects BuckleyGrayYeoman.

First Base and Patron Capital acquired the former AMEX House site last September. Since 2013, American Express, which also sponsors Brighton & Hove Albion’s football stadium, has been operating from it’s a new state-of-the art office at 1 John Street located on the site next to the former Amex House building. CBRE advised First Base on obtaining planning consent for the redevelopment.

Kevin Cooke, development director at Patron Capital, said: “Securing planning consent is a major step forward for this exciting development that will re-energise this area of Brighton and is set to be a popular addition to the city for residents, businesses and visitors.”

It is First Base’s second project in Brighton having secured planning permission for the regeneration of Anston House last year. That site, being developed in joint venture with Hyde Housing, will deliver 229 homes and flexible workspace having been derelict for 30 years and the subject to over 20 failed planning applications.

Barry Jessup, director at First Base, added: “The demand for workspace and homes in Brighton and Hove is growing. Our plans at Edward Street will bring modern workspace into the city, keep businesses and jobs local and provide much needed homes for Brightonians. We are very pleased to have the support of Brighton & Hove City Council and we look forward to working together to bring these exciting plans forward.”