The first phase of a £1.4bn mixed-use scheme to regenerate Mayfield in Manchester has been unanimously approved by Manchester City Council. 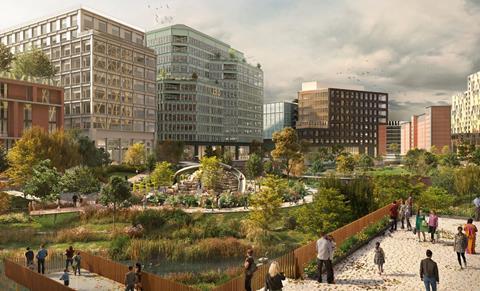 The Mayfield Partnership—a collaboration by Manchester City Council, Transport for Greater Manchester (TfGM), LCR and developer U+I—will begin building the park at the centre of the development and some of the surrounding buildings this year.

“The Mayfield scheme will deliver real improvements and opportunities for Manchester’s people,” said Sir Richard Leese, leader of Manchester City Council. “Not only will it create a significant new city-centre green space for people to enjoy—something which was integral to the master planning of this development—but it will also deliver thousands of new jobs, transforming an unloved and largely underused part of the city centre into a world-class gateway.”

U+I’s chief development officer, Richard Upton, said: “Mayfield will be one of the UK’s defining urban developments this decade.”

He added: “These plans for the first phase bring together exceptional new workplaces with cultural space, centred on a beautifully landscaped park that will provide a transformative and sustainable public amenity for the people of Manchester long into the future.”