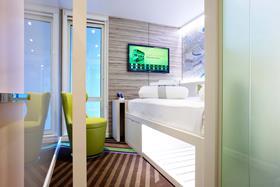 Premier Inn will take a lease on the hotel, which is a key component of the £105m, 84,500 sq ft scheme. It also includes 13 retail units, 16 homes and substantial improvements to the public realm in and around Berwick Street, its market and along Hopkins Street.

The first Hub by Premier Inn opened in St Martin’s Lane in Covent Garden in autumn 2014 and a number of sites in London and Edinburgh are currently being developed.

Jonathan Langdon, acquisitions manager, London West End & City, for Hub by Premier Inn, said: “Just as we have done with our debut hotel in Covent Garden, we want to bring a great new product and exciting new choice into the market while also creating jobs, integrating into the local community and making a positive difference.”

The 90-104 Berwick Street scheme was given planning consent in June 2014. PMB has a long-leasehold on the site, the freehold of which is owned by the London Borough of Westminster, and anticipates appointing a main contractor and moving forward with the scheme later this autumn.