Budget hotel chain Premier Inn has secured its first site in Dublin city centre as it kicks off a major expansion in the Republic of Ireland. 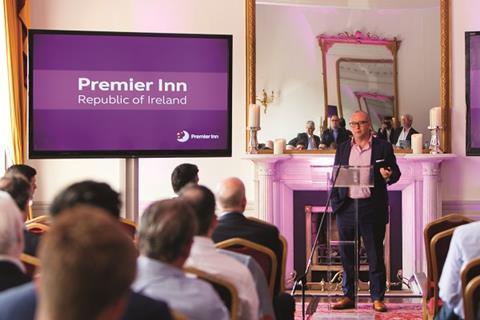 The Whitbread-owned budget hotel chain has signed a leasehold agreement with developer Greenleaf Group on a site at 41-46 South Great George’s Street, where it plans to open a 97-bed hotel.

The scheme has been granted planning permission, subject to the expiration of the appeal window on 3 September. Premier Inn intends to invest around €16m (£14.3m) in the scheme, which is expected to open by summer 2021.

Prompted by the undersupply of branded budget hotels in Ireland compared with mainland UK, the company plans to open 10 to 15 hotels in Dublin city centre before rolling out to other cities such as Limerick, Galway and Cork.

Its target locations include the Docklands business district, the shopping quarter around O’Connell Street and other parts of the city centre.

Speaking about its plans, Kevin Murray, head of acquisitions, north and Ireland, at Whitbread Group, said: “Our ultimate goal is for Premier Inn to be as big, comparatively, in Ireland as it is in the UK and the number-one branded chain in the country.”

The brand already operates seven hotels in Northern Ireland but has just one in the Republic of Ireland, at Dublin Airport. That hotel was acquired in 2007 as part of a portfolio and now trades at more than 90% occupancy.

The move is part of Premier Inn’s wider international expansion. It launched its first hotels in Germany in 2015, and agreed a deal to acquire 19 hotels there earlier this year.