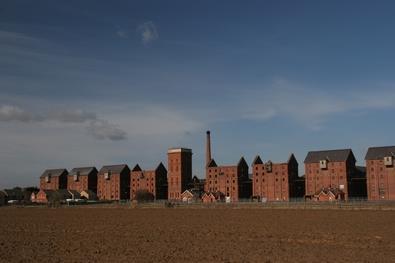 The Prince’s Regeneration Trust, the Prince of Wales’ regeneration charity, and developer Gladedale have submitted a planning application for the Bass Maltings building in Sleaford, Lincolnshire.

The pair said the application represented many years of work on how to accommodate new uses in and around the Grade II-listed buildings.

The plans include housing, office and commercial space and community facilities, and the developers say it will form a new quarter for the Lincolnshire town.

The Maltings were built by Bass between 1901 and 1907 and cover more than 500,000 sq ft. The buildings were bought by GW Padley Property after production at the Maltings stopped in 1958, and then used them as chicken rearing sheds.

HRH the Prince of Wales visited the site to promote the case for regeneration and the Trust has worked with site owner Gladedale since it bought the site in 2006. English Heritage and North Kesteven District Council have also worked on the plans.

Ros Kerslake, chief executive of the Prince’s Regeneration Trust said: ‘This has been one of the most complex and challenging heritage regeneration projects in the country and it is a huge tribute to the dedication of the developer and other local stakeholders that we have reached this remarkable point. It is particularly commendable given the current economic climate.’

Simon Cocks, development manager for Gladedale, said: ‘The immense size and poor condition of the buildings has added to the complexity of this significant regeneration project, but we are confident that the scheme proposed will release the potential of this spectacular group of buildings.’