Quarter of property industry would take pay cut to save firm 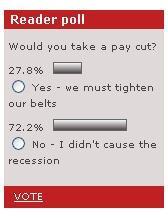 More than a quarter of employees in the property industry would take a pay cut to help their firms through the recession.

In an online poll on PropertyWeek.com almost 28% of respondents said they would 'tighten their belts' if necessary.

72% of respondents said they were 'not responsible' for causing the recession and would not want to take a pay cut because of it.

Property Week web editor Iain O'Neil said: 'Clearly the majority of employees are not going to vote for a voluntary pay cut but I think the fact that more than one in four would be willing to give some of their wages back to their company is remarkable.

'When these companies were making good profits they rarely - if ever - looked to pass on profits to salaried employees, so to ask those same employees to take a hit because profits are down seems a little unfair.

'However, as we have seen around the country there are times when a pay cut really could be the best option for all concerned.

'If it is a choice between a pay cut or possible unemployment as a result of the business going under, the decision may not be as straightforward.'