Revealed: the full scale of offshore investment in the UK

A staggering £263bn has been invested in property in England and Wales by companies registered offshore since 2000, an investigation by Property Week has revealed. 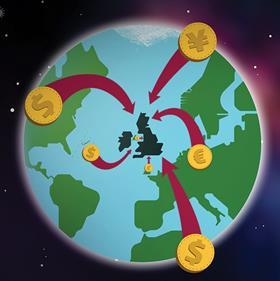 The analysis of Land Registry data lays bare for the first time the full scale of offshore investment into the UK and shows that the total amount invested each year has risen from just £2bn in 2000 to £32bn in 2014 - a 1,500% increase.

The revelation follows David Cameron’s pledge in the summer to crack down on the use of offshore-registered shell companies to launder “dirty money” in the UK property market.

Although there are many legitimate reasons for registering a company offshore, the volume of money flowing into UK property from offshore firms suggests the problem identified by the prime minister could be more serious than first thought.

In response to Property Week’s investigation this week, the government agency responsible for cutting serious and organised crime in the UK said it had no way of assessing how much of the £263bn that has flowed into the UK from offshore companies could be “dirty money”.

“A combination of factors mean that we will never know exactly how much criminal money is being laundered through the UK market,” a National Crime Agency spokesman said. “These factors include the hidden nature of the problem, the intermingling of legitimate and illegitimate funds and the lack of transparency in some source countries.”

Property Week’s research, which analysed the entire database held by the Land Registry on offshore ownership, found that £85bn, around a third of the total investment, came from companies registered in Jersey, with the British Virgin Islands (BVI) the next greatest source of cash (£50bn).

Campaign group Transparency International (TI) has long expressed concern that the BVI is used to launder money through UK property because of the high degree of confidentiality given to companies registered in the territory. “For money launderers, that secrecy is a very useful tool to help them launder their ill-gotten gains and provides them with a level of impunity to help them escape justice,” said Nick Maxwell, TI head of advocacy and research.