Sainsbury’s takeover could result in hundreds of Argos store closures

Sainsbury’s supermarket has reported a better-than-expected performance in its Christmas quarter and upgraded its sales forecast for the second half. 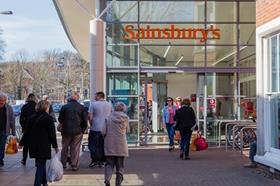 In a statement released this morning, the firm said sales at stores open over a year fell 0.4%, excluding fuel, in the 15 weeks to 9 January.

That compared to analysts’ average forecast of a fall of 0.7% and a second quarter decline of 1.1%.

Sainsbury’s said it now expects its like-for-like sales in the second half of the year to be better than the first. Previously it had expected a similar performance.

It also confirmed that hundreds of Argos stores could close under plans to buy owner Home Retail Group as it set out its case for the £1bn-plus takeover.

The group had said it was still “considering its position” after it revealed it had made an approach to buy the group in November, which had subsequently been rebuffed.

Sainsbury’s now has until 2 February to resubmit an offer.

In a presentation outlining its rationale for the tie-up which it made public today, Sainsbury’s said up to half of the Argos chain’s 734 stores could be shut and instead brought into its supermarkets as concessions.

The two firms have been working together over the last year, with Sainsbury’s trialling Argos concessions in its stores.